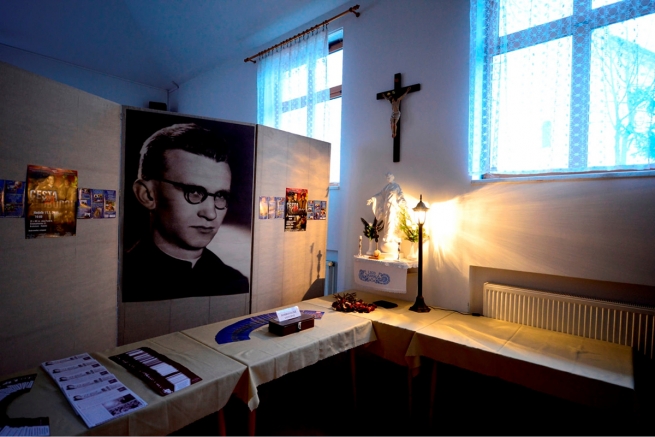 (ANS - Rome) - Monday 8 January marks the first liturgical celebration in the Memory of Tito Zeman, beatified in Bratislava (Slovakia) on 30 September 2017. The date coincides with the dies natalis of the new blessed who died in hatred of the faith at age 54 on 8 January 1969 in Vajnory, a suburb of Bratislava, where he was born on 4 January 1915.

The first of ten children, at the age of 10, he suddenly healed by the intercession of the Virgin Mary to whom he promised to "be her son forever" and to become a Salesian priest. In 1932, he made his first religious profession. In 1940, he was ordained a priest. After escaping the "Night of the Barbarians" (April 13-14, 1950), he decided to accompany several young confreres, escaped through the Iron Curtain in the direction of Turin so they could become priests. He also tried to save several diocesan priests. After two successful journeys (late summer and autumn 1950), in April 1951 the expedition failed. Father Tito Zeman was arrested, tortured, was imprisoned for 12 years and almost 5 years on supervised parole.

"From this we have known love: He has given his life for us; therefore we must also give our lives for our brothers."(1 Jn 3:16). It was in listening to the Word of God during the celebration of the Eucharist that Tito Zeman felt in his heart the inspiration and the strength to sacrifice his life for the salvation of vocations, overcoming fear and declaring himself ready to follow God's will to the end, entrusting himself to divine mercy and hoping for eternal life. The texts of the liturgical Memory are inspired by this decisive moment in his life when he felt the call to give his life for the salvation of young vocations.

His testimony is the incarnation of the Salesian charism in giving one's life for the salvation of the young by, above all, accompanying them in the journey of faith and discernment in the fulfillment of their vocations, as recalled by the theme of the next synod of bishops and the Strenna of the Rector Major.

The liturgical texts can be found at:http://www.sdb.org/en/salesian-saints/175-liturgical-calendar