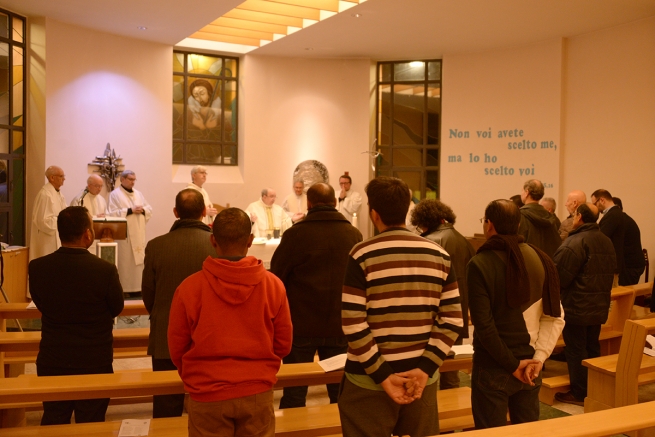 (ANS - Rome) - The VI General Assembly sees the representatives of the “Volunteers With Don Bosco” gathered in Rome; coming from different parts of the world, they meet to reflect on the theme: «"Like living stones "(1 Pt 2:5) -  to grow in communion."

Introduced by the reflections dictated by Fr Pascual Chàvez and by the President of the Instituto Secolare "Cristo Re", the 17 CDB and the 6 Ecclesiastical Assistants discussed the theme of communion and fraternal life according to the characteristics of a secular institute whose members "do not have a common life, but live in communion of life."

The meeting was attended by the Delegate of the Rector Major for the Salesian Family, Fr Eusebio Muñoz, whose qualified contribution strengthened the sense of belonging to the Salesian Family in which the CDBs form an officially recognized Group. The visits of the Rector Major's Vicar, Fr Francesco Cereda, the SDB Regional Councilor for East Asia/Oceania, Fr Vaclav Klement, and of the Postulator General for the Causes of Saints, Fr Pierluigi Cameroni were welcomed and much-appreciated; there were also various messages of good wishes from Provincials/Coordinators of Groups of the Salesian Family.

Representing the entire institute, the brothers also convened to approve modifications to the Constitutions and Regulations, as well as to elect the World Director and the Central Council to lead the Institute for the next four years with functions of "animation and government."

The new Director was elected in the person of Gaetano C., a 42-year-old Italian teacher. He will be assisted by a Venezuelan Vice-President, a Mexican Formation Advisor and an Italian Communications Councilor. The composition of the Board will be completed when the World Director appoints the Central Administrator and the Central Secretary.

The Assembly was also an opportunity to inform delegates on the current phase of the beatification cause of a CDB brother, Nino Baglieri, who died in 2007 "in hunger for holiness."

Tomorrow, Friday 5 January, the Rector Major, Fr Angel Fernandez Artime, presides over the closing Mass for the Assembly; a CDB of Brazil will also make his perpetual profession and a young Italian CDB shall renew his temporary profession.


The Volunteers With Don Bosco are a Public Association of Lay Faithful oriented to becoming a Secular Institute. Currently, there are 92 members present in 27 nations (7 in Africa, 13 in America, 2 in Asia, 5 in Europe) making their own specific contribution as consecrated seculars in the Salesian style.