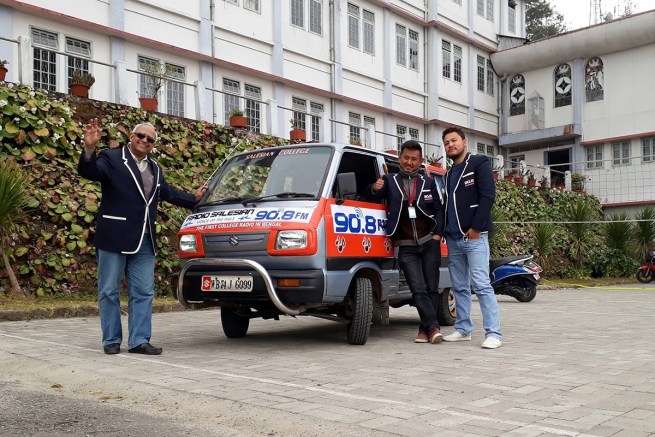 Darjeeling - A radio from the university community in the hills of Darjeeling has organized a historic "Indo-Nepalese Friendship Tour" with a team of radio journalists; a visit to 7 institutions in Nepal run by former students of the Salesian College Sonada (SCS) is planned to celebrate its 80th anniversary, as well as the 25th year of the presence of the Don Bosco Society in Nepal.

The show also recorded the first year of Radio Salesian, the original university radio station in Bengal and in North-East India. The tour on Radio Salesian Maruti Omni Van begins on Sunday 7 January from Sonada, passing through the Indo-Nepalese border of Kakrabitta near Siliguri and then proceeding to Dharan, from where the Don Bosco Society's activity in Nepal began; it will then reach Kathmandu, in western Nepal.

The SCS vice-president Paul illustrates the program: "To promote higher education in the Salesian College Darjeeling and the Siliguri campus we will in a week visit the institutions of Don Bosco, as well as two secondary schools (Kakrabitta, Birtamod, Dharan, Biratnagar, Ithari and Kathmandu)."

The history of the Nepal Don Bosco Society began in 1992 with the center of Dharan, in eastern Nepal, started by the late Fr George Alakulam.

The Salesians reached Sirsia (1996), then the capital Kathmandu, with two centers - in Lubhu, founded in 1996, and Thecho in 2001; Baroul and Chakkarghatty then opened (2014) in eastern Nepal; and finally Biratnagar in 2017, for a total of seven houses, now run by 18 Salesians from various states of India.

A number of social programs are also offered: scholarships for students and emergency response projects, such as the consequences of the tragic earthquakes of 2015.