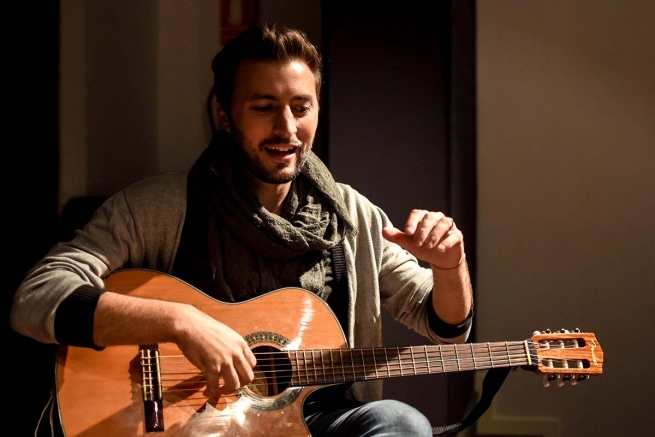 (ANS - Montevideo) - Music as art to evangelize and transmit the essence of the Salesian charism, because being musicians and sharing the Salesian spirit are often things that go hand in hand. Diego Melano and Francisco Romero, two young musicians, narrate the beginning of their artistic vocation.

"The idea came from a group of animators of Maturana," they explain, "that at a party of Mary Help of Christians decided to change the rhythm of the Mass songs and give it a different rhythm." Francisco Romero adds: "They are not a musical band, but a group of animators playing instruments, who try to entertain others, that convey joy and above all the Salesian charism."

When they first started playing and performing, the audience response was an immediate success. The musicians realized this could be a channel for conveying a message using a youthful language. Both artists agreed that was the way they liked to live the faith, and in which they felt most comfortable when it came to doing animation: to live the art world as a vehicle for evangelization.

There is a key moment in which each artist discovers his or her vocation. Francisco was not interested in music at first, but something that manifested itself in adolescence. "I remember there was a guitar at home ... It was just there and it attracted me, so one day I asked my mother to teach me some chords. Since then I have never stopped playing."

"I realized," Diego adds, "that young people listened to what I would say on the microphone. The person who speaks up there has a chance ... Orators speak to many people and the stage ensures they are watched. I understood then that what I say and do is what God tells me."

Both artists agree that sharing the Salesian charism reflects directly on their art. "My Salesian spirit is tied to the theme of joy. The music I play transmits my values. I try to be myself at all times with my Salesian spirit and rejoicing in what I do," says Francisco.

"I can present songs that talk about life itself," Diego explains, "and this is really God. My story could not be any other way. Being a Salesian and being a musician is the same reality."