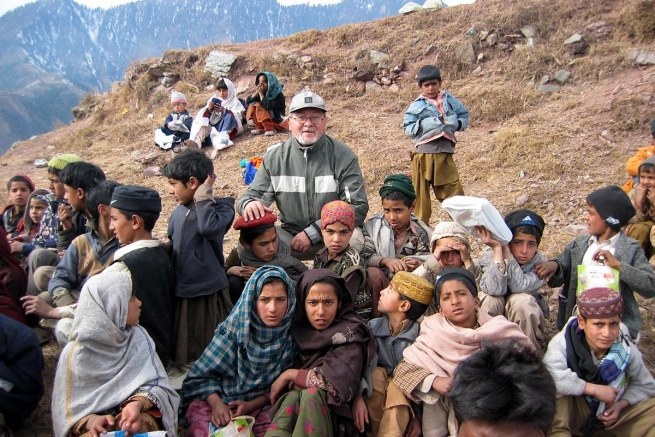 (ANS - Perosa Argentina) - The death of Fr. Pietro Zago, a Salesian missionary who passed away on 28 December 2017 in Perosa Argentina, near Turin, has greatly affected the Salesian Congregation, especially in Asia-Oceania. He had retired to Turin a few months ago due to his worsened health conditions, after a life spent for the young in need in many different countries.

"He was a man of prayer, a devoted son of Mary. He was Don Bosco among the young," says Fr David Buenaventura from the Philippines where Fr Zago served for over 25 years, becoming from 1992 to 1997, the (FIS) South Philippines Province's first Superior.

"Many have expressed the desire to follow Jesus in the consecrated life on seeing his warm and joyful style of life. I am one of those who, fascinated by his laughter and by the ever-present rosary, moved to live with the Salesian community led by this loving father," declares Fr Samuel Adnan Ghouri, the second Pakistani Salesian priest.

Mgr. Patrick Buzon, SDB, bishop of Bacolod, also in the Philippines: "Our deepest gratitude to our beloved founder of the Philippine-South Province and the Pakistan mission! On a personal note, thank you, dear Fr Peter, for patiently mentoring me! Enjoy your deserved reward in the Father's house and pray for us."

"Fr Peter will not rest ... not even in heaven... he is busy setting up a new Vocational Training Center... or another Oratory for the poor... He is a true model for us all!," said msgr. Luciano Capelli, SDB, bishop of Gizo, Solomon Islands.

"Fr. Peter Zago started the work at the Don Bosco Technical School. He is still remembered by the first students of DB Vunabosco and by the people of Rabaul. May he rest in peace!," adds msgr. Francesco Panfilo, SDB, archbishop of Rabaul, Papua New Guinea.

Of his nearly 83 years of life, Fr Zago spent 62 as a missionary. He served the young of India, Indonesia, East Timor, the Philippines, Papua New Guinea, and finally Pakistan, where he spent the last 18 years of his life and founded the two centers currently present in the countrymn, namely Quetta and Lahore. He also actively contributed to the support of refugees and the poor and to the reconstruction of the villages damaged in the 2005 earthquake and the 2010 floods.