Chile - Pope Francis to religious and clergy: "the People of God do not wait for, nor need superheroes" 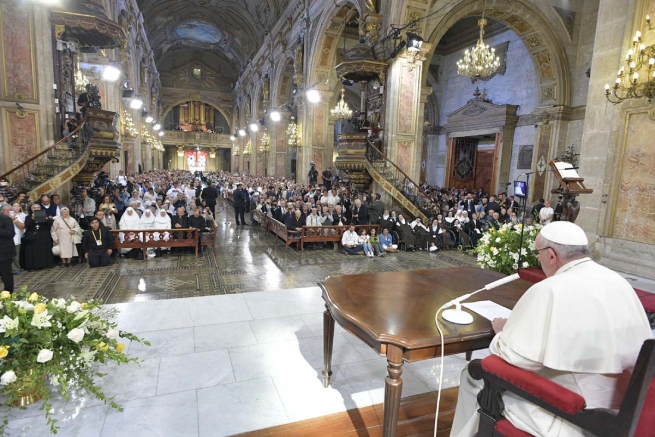 (ANS - Santiago) - It was with a climate of joy and celebration that the priests, consecrated persons and seminarians welcomed Pope Francis to the cathedral of Santiago for their meeting together. "We have long been awaiting you," said Salesian Cardinal Ricardo Ezzati, archbishop of Santiago, at the beginning of his opening address.

The Pope used the "Peter-community" analogy as the experience of the apostles always had this dual aspect, that is, the personal and the community. They go together hand-in-hand and cannot be separated. He said we were, yes, called individually, but always to be part of a larger group. "There is no vocational selfie. The vocation requires that another person takes a picture of you: what can we do?"

Pope Francis also referred to the scandals of which some priests marked themselves. The Pope had previously met privately with several victims of abuse by priests and religious. He, too, felt the suffering of the victims, their families and felt the pain of that part of the ecclesiastic community that remained faithful: "I know the pain that the cases of abuse against minors have meant and I attentively follow all you do to overcome this serious and painful evil. Pain for the damage and suffering of the victims and their families, who saw the trust placed in the ministers of the Church betrayed."

The Pope spoke of Chile and the challenges before which we sometimes isolated ourselves. "We forget that the promised land is in front of us. That the promise is yesterday's, but for tomorrow. And we can fall into the temptation to close off and isolate ourselves to defend our positions that end up being nothing but nice monologues."

The Pope added that, "the People of God does not wait for, nor does it need superheroes; they wait for shepherds, consecrated persons, who know compassion, who know how to stop before those who have fallen."

He concluded by inviting the entire assembly to prepare "a kind of spiritual testament" in their hearts, adopting as a role model Chilean Salesian Cardinal Raúl Silva Henríquez, and to renew one's own 'yes' to God with "that beautiful prayer that begins by saying: 'The Church that I love is the Holy Church of every day ... yours, mine, the daily Holy Church of every day ... '".