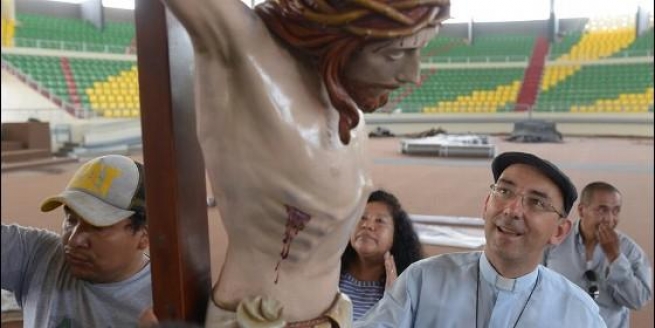 (ANS - Puerto Maldonado) - After three days in Chile, Pope Francis reaches Peru today, January 18, the second and last stage of his apostolic journey to South America. Also in Peru to accompany the celebrations of the pontiff there will be a bit of "salesianity" - as previously in Iquique, where to adorn the altar of the mass there were 12 thousand traditional aluminum flowers by the Salesian past pupil Humberto Alache. This time, however, it is a crucifix and chairs for the Pope, all works created by the youth of the "Taller Don Bosco", to be used tomorrow, January 19, in Puerto Maldonado.

"We want this to be the Christ that the Pope, with his presence, will bless; it will be the Christ of Pope Francis," says Msgr David Martinez de Aguirre, bishop of the Apostolic Vicariate of Puerto Maldonado.

"The crucifix and the chairs were made by young members of the Don Bosco Artesanos," explains Agustín Guzmán, from the Don Bosco parish of Puerto Maldonado. The 'Taller (workshop) Don Bosco' was created by the Salesian priest Ugo de Censi at the beginning of the 90s, "to offer some work and education to people with low income," he adds. Today, woodworking, stone, bronze and weaving products are being produced at the laboratory.

With the Christ, the three chairs have also arrived, and will be on the stage of the meeting, the central one reserved for Pope Francis.

Attention is drawn to the fine details of the chairs, like the furrows carved in the armrests. "The furrows are used to understand who worked; they are the children of peasants and those lines are reminiscent of the furrows of the plow," continues Guzmán.

The crucifix also stands out for its fine finish and detailed work. Made entirely of wood and oil painted, it will be placed on a large wooden wall behind the Pope.

"Under the crucifix there will be bamboo rods and chairs in front," adds Paula Franco, responsible for the preparation of the venue for the celebration of the Pope, who emphasizes how the whole setting was designed to make the Pope feel inside of a community.

After the Pope's visit, the crucifix will remain in Puerto Maldonado, in the chapel adjacent to the city's Cathedral.