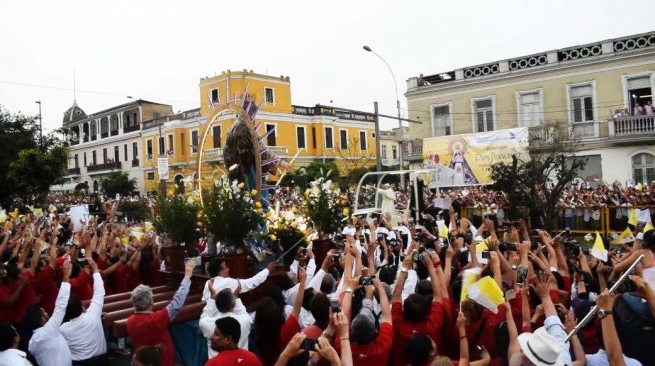 (ANS - Puerto Maldonado) - An indescribable feeling: the experience of Peru's Salesian Family during various meetings with Pope Francis these past few days. In the capital, Lima, and then in Puerto Maldonado, young people, Salesian religious, representatives of missions and indigenous peoples accompanied by the Sons of Don Bosco, had the opportunity to display their affection to the Pontiff and to listen to his words of hope and of encouragement.

On the first day of the Pope's Apostolic Voyage to Peru, Friday 18, the Salesian Family and many other young Catholics gathered n the capital along the Papal route. Besides songs and prayers, the young welcomed the Pope by exhibiting a large statue of Mary Help of Christians. Passing along "Avenida Brasile", the Pope gave his blessing to all those present. In the evening of this festive day, a crowd of young people, accompanied by the Provincial, Fr Manolo Cayo, waited for the Pope to appear under the balcony of the Nunciature. "If this was the first day ... what will the next few days be like?," said Provincial enthusiastically.

In fact, the second day saw the Salesians play an even greater role in the program of the papal trip, thanks to Fr Diego Clavijo, Salesian missionary, and the deacons of Achuar origin of Kuyuntsa, at the Eucharist presided by the Pontiff in Puerto Maldonado for all the indigenous peoples of the Amazon.

On the occasion, Pope Francis spoke very clear words in favor of respect for the original peoples of the Amazon, who "have never been so threatened in their territories as they are now", because of "neo-activist (extraction) policies and the strong pressure of large economic interests that direct their greed on oil, gas, gold, agro-industrial monocultures", but also from the "perversion of certain policies that promote the conservation of nature without taking into account the human being and, in concrete terms, of you Amazonian brothers who live there."

To thank the Pontiff for his presence and for the attention he is dedicating to the Amazon - also highlighted by the appointment of a special assembly of the Synod of Bishops for the Pan-Amazon Region in 2019 - Fr. Clavijo and the Achuar who accompanied him donated a colored stole and wrote a letter to the Holy Father "to ask him to promote a Church that is born in Amazonia, with its own ministers."