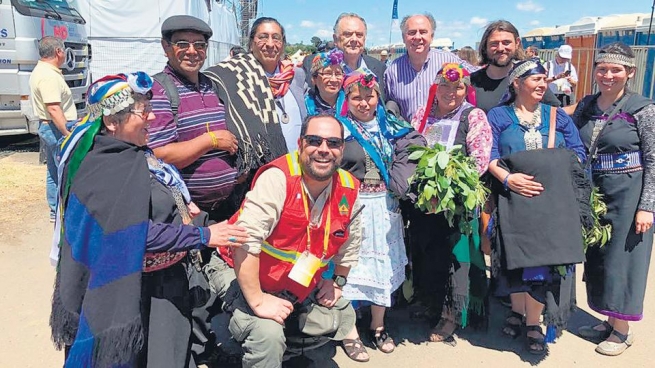 (ANS - Temuco) - Before celebrating Mass in the city of Temuco last January 17, Pope Francisco met Juan Namuncurá, a relative of Salesian Blessed Ceferino Namuncurá (1886-1905), together with a group of Argentines.

The Holy Father had decided in advance that in Temuco he would reserve some time for a meeting, even a short one, with some people of Argentinian nationality he wanted to see and listen to personally for a short while.

Among those received by the Pope: Mario Cafiero, political leader; Eduardo Valdés, former Argentine ambassador to the Holy See; Juan Namuncurá, whose great-uncle was blessed Ceferino Namuncurá, in turn the son of the indigenous leader Manuel Namuncurá. Joining this group, at the invitation of the first three, was Juan Carlos Reinao Marilao, a medical doctor, politician and Chilean Mapuche leader, who has been mayor of the town of Renaico since 2017 and is President of the Association of Chilean Municipalities with Mapuche Mayors.

A few months after the Pope's visit to Chile, Juan Namuncurá decided to write a letter to the Pope. Mario Cafiero and Eduardo Valdés served as facilitators so that the missive of almost four pages reached its goal as it, indeed, did.

"Dear and and most respectable Francis, I am Juan Namuncurá, preceded by the fame of the actions of my ancestors - the most famous and beloved of which, as far as recent times are concerned, is my great-uncle, Ceferino, or Zeffirino, our little Sapphire."

Thus began the letter the Pope received and read, its purpose immediately explained: "I wish to be 'a bridge for your brothers' who, on a person level and as a consequence of the times, are not only those who once inhabited the communities, today commonly called 'Mapuche', but all of society."

In his letter to the Pope, Juan Namuncurá expressed his wish to continue "the inheritance and commitment of the family lineage" by seeking together "with a small group of brothers (...) new roads and bridges, based on peace and harmony" centered on the concept of "democratization of indigenous peoples."

After reading the letter, the Pope invited Namuncurá to meet him in Chile and to speak personally about these problems, outside the official agenda. This was the theme of the dialogue in the improvised sacristy of Temuco. Juan Namuncurá described the dialogue as "very concrete and profound", but did not specify the terms of the exchange. He also expressed surprise at how the Pope recalled the letter's details, taking noting that several themes and expressions were also adopted in the homily given a little earlier. "I admired," Namuncurá said, "the enormous intellectual speed of Francesco", from whom he hopes to receive support for his initiative and with whom he will remain in contact in the future to advance the conversations begun in Temuco.