RMG – Visit of the Rector Major in ITM Vice-province 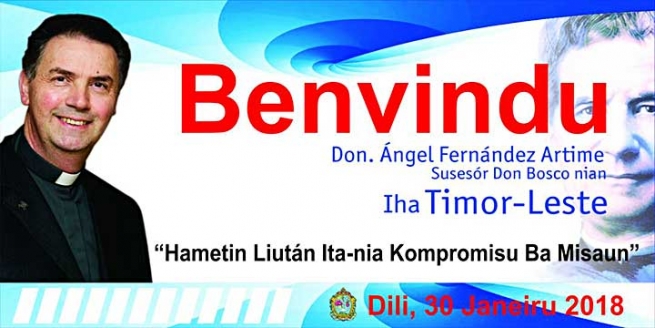 (ANS – Rome) – Also this year the Rector Major has chosen to celebrate the Solemnity of St. John Bosco not at the Valdocco of Turin (2016 - Sierra Leone, 2017 in Dominican Republic) but in Dili - the capital of Timor Leste.

The 200+ confreres of the ITM Viceprovince living in two countries (RDTL - Republica Democratica de Timor Leste and Republic of Indonesia) are excited to welcome the 10th Successor of Don Bosco with a meaning. The best witness is the prayer for the visit of the Rector Major already circulated in all EPC of Timor Leste in Tetun language and in the Indonesia Delegation in Bahasa Indonesia. On the welcoming banner we can read in Tetun: 'Hametin liutan Ita-nia compromisu ba misaun' (=Strengthen our commitment for the Mission).

During the five full days of Timor Leste visit, the 10th successor of Don Bosco will preside the Solemn Eucharist on January 31st in Dili - Comoro and held a variety of encounters with the Salesians of Don Bosco, with the Rectors, with the Provincial Council ITM, with the Salesian Youth Movement and also with the main groups of the Salesian Family: FMA Sisters (Venilale), ADMA (Fatumaca), Don Bosco Alumni (Dili) and Salesian Cooperators (Dili). The only movement out of the capital of Dili will be towards the 'Valdocco of Timor Leste' in Fatumaca (Shrine of Mary Help of Christians, Novitiate, Aspirantate, Don Bosco Technical School, VTC, with the social and pastoral work in nearby rural zone).