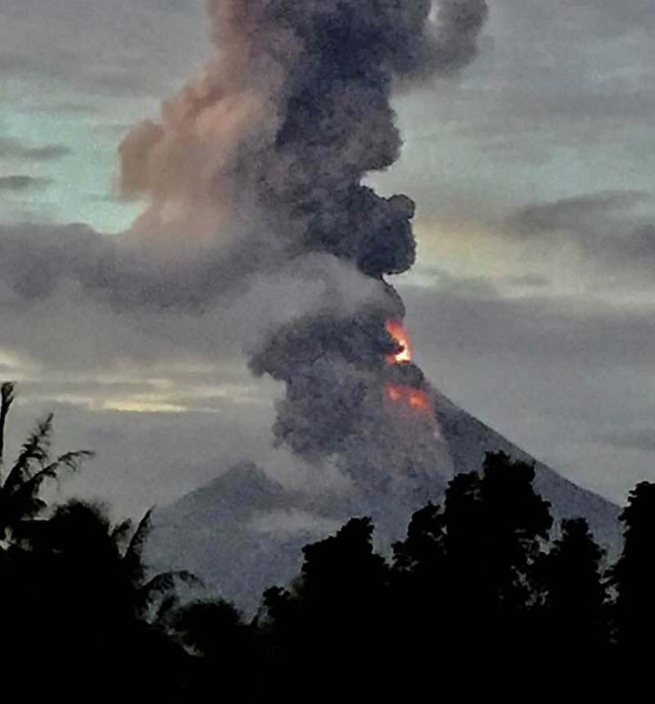 (ANS – Legazpi) – From the Salesian Legazpi community, Don Bosco Vocation Training Center, the latest update on the Philppines vulcano Mayon's  continous eruption since January 22, 2018: Don Bosco Vocation Training Center (VCT) is about 24 km aways from the volcano Mayon and the danger zone declared by the government is only 9 km from the volcano Mayon. We are, however, located at the safe side. Secondly, the elevation of the hilly part of Legazpi where Don Bosco is located is more than 70 meters above sea level, thereby much safer in relation to other areas in the province.

Indeed the possible effect on Don Bosco VTC from the eruption is through the fall of ash the volcano emits. But at the moment, the wind direction does not lead to the Don Bosco Legazpi side. Don Bosco Legazpi now coordinates the social action of the diocese to help the people in evacuation areas.

The social action arm of the Catholic Church in the Philippines has appealed for donations for the relief and rehabilitation of families affected by the ongoing eruption of Vulcano Mayon in Albay province. Over 70,000 people have already been evacuated to temporary shelters as the volcano started spewing columns of ashes as high as ten kilometers this week.

The Diocese of Legazpi declares that most of those affected by the eruption are farmers who live and work within the volcano's six-kilometer radius permanent danger zone. "Their lives are disrupted and their means of livelihood suddenly became inaccessible, that is why they need all the help we could give."

The immediate needs of the affected communities include sleeping mats, mosquito nets, blankets, face masks, hygiene kits, firewood, food, water, toilets, and communal kitchens. Parishes around the diocese have already activated their respective Parish Disaster Response Committees that set up of soup kitchens. Church facilities are also being opened to house the most vulnerable evacuees, such as pregnant and lactating mothers, persons with disabilities, and the elderly. The government's National Disaster Risk Reduction and Management Council has also announced that it has already prepared relief goods for the displaced population.

On January 22, the Philippine Institute of Volcanology and Seismology raised Alert Level 4 over the volcano and advised the public to desist from entering the 9-kilometer radius danger zone. Bishop Joel Baylon of Legazpi issued circular letters urging the faithful in his diocese "to open your homes once again and welcome some of our brothers and sisters... If for whatever reason this is not possible, can we at least consider allowing those to use our toilets and bathrooms?"

Mount Mayon is the most active volcano in the Philippines, erupting more than 50 times in the past 500 years. Its most destructive eruption was on Feb. 1, 1814, burying the town of Cagsawa and killing at least 1,200 people. The volcano has so far ejected 6.2 million cubic meters of volcanic materials including molten rocks in the past week, with sulfur dioxide gas emission at an average of 2,466 tons per day.