RMG - Rector Major's"Goodnight": "We are a Congregation that continues to grow in loyalty to young people" 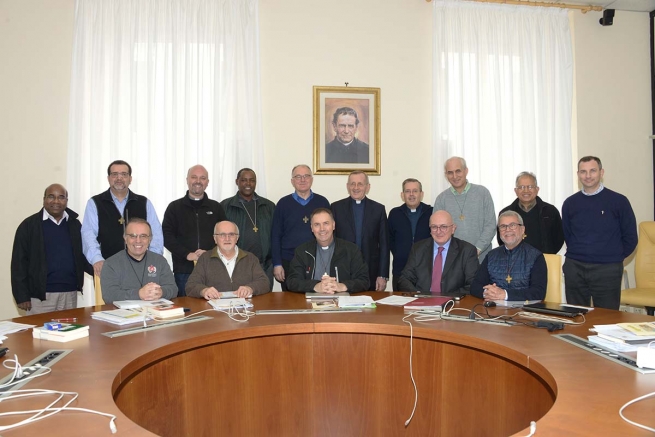 (ANS - Rome) - On the feast of the conversion of St. Paul the Apostle, 25 January, the Rector Major, Fr Ángel Fernández Artime, offered the thought of the Salesian "goodnight" at the end of the winter plenary session of the General Council, the first celebrated in the new Salesian Headquarters of the "Sacred Heart", its name: "Comunità San Giuseppe."

"We thank you for what you are for this community and for the whole Congregation, dear Rector Major. Our community is yours, it supports you and always accompanies you with prayer," said the Director of the San Giuseppe community, Fr Jean Claude Ngoy. "It is thanks to your animation that every Province in the world enters the vision of the Rector Major, becomes converted to the love of God and neighbor, who are our young people, and becomes a tireless missionary, according to the heart of God and the model of Don Bosco."

Fr Á.F. Artime described how the General Council met during the months of December and January for work he deemed intense; six Provincials were appointed: Fr Ábrahám Béla, confirmed Provincial of Hungary; Fr Tihomir Šutalo, new Provincial of Croatia; Fr Januarius Sangma, Provincial of India-Guwahati and Fr Paul Olphindro, Provincial of India-Shillong; Fr Marko Košnik, Provincial of Slovenia; and Fr Jefferson Luis da Silva Santos, Provincial of Brazil-Manaus Province. All the appointed Provincials reached the seat of the Salesian Congregation to dialogue with the Rector Major and to receive a letter with the "roadmap as Superiors of the Provinces", a task entrusted to them by God, with the mission of animating and governing them.

The Rector Major then added that four Vicars and eight Provincial Economers were also appointed as were 105 Salesian Directors. Three Salesian centers have been opened, others closed. He emphasized that "we are a Congregation that continues to grow in fidelity to the most needy young people."

"I thank you from my heart for all the service each of you offers in the Dicasteries, a service that makes the Congregation great," the Rector Major concluded. "May the Lord accompany us in continuing to do his will, wherever he calls us and in the service he asks of us."