East Timor – Fr Ángel Fernández Artime: "I come here because I love you all" 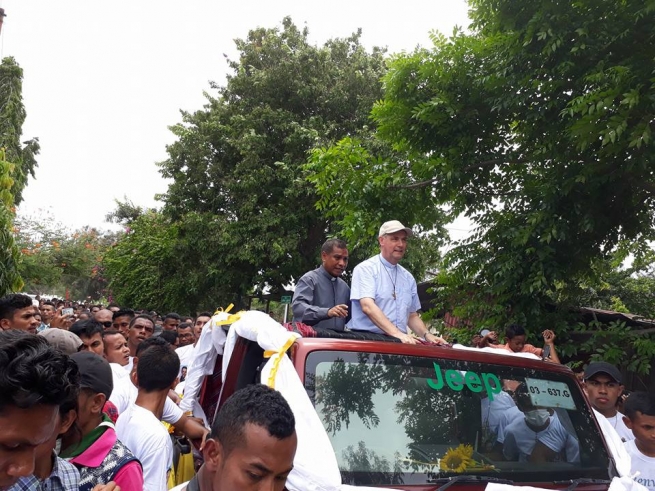 (ANS – Dili) – The tenth successor of St John Bosco and Rector Major of the Salesians, Fr Angel Fernandez Artime SDB arrived at Dili, East Timor, on the morning of 30 January. This is the third Salesian Rector Major visiting East Timor after the first and second visit of Fr. Egido Viganò 30 years ago in 1988, and Fr. Pascual Chavez 14 years ago in 2004; hence, 91 years after the first Salesian community arrived in Timor Leste in 1927.The Rector Major was accompanied by his secretary Fr. Horacio Lopez and Salesians from Jakarta Fr. Lino Quintão Belo and Fr. Onny, together with Salesian Bishop Virgilio do Carmo da Silva, Bishop of Diocese of Dili.

The Rector Major and his team were solemnly welcomed at Dili airport by many members of the Salesian Family: thousands of young people and students and many Salesians and Salesian Sisters, Alumni of Don Bosco, Salesian Cooperators, ADMA and friends of Don Bosco who were eagerly awaiting the Rector Major. “Seeing, touching and meeting the Rector Major in person is really a blessing for me and for my family,” says Gaspar Freitas Kassa, an alumnus of Don Bosco and a father of two children. “Talking to him and listening to him, during this coming 7 days,.. well I feel very blessed and I can feel Don Bosco's presence. His visit is really strengthening our alumni commitment to share mission with Salesians here. He brings alive the experience of Don Bosco to us to explore.” Many other young students shouted: “Viva Don Angel, Viva Don Bosco, bemvindo and welcome dear Fr. Angel to our country, we love you.”

Fr. Angel was then driven by parades of young people to the Hall of Youth Training Centre, where the formal ceremony was held, accompanied by Fr. Apolinario, the Provincial, driven by a car surrounded by young people. He was also stopped for a while by Salesian Sister students to welcome him with a beautiful song of benvenidos.

In a welcome speech by Provincial Fr Apolinario in Portuguese, he thanked the Rector Major for his presence in the Province. “A father between us, Don Bosco’s presence in our life. Your presence opens for us a new well of joy and of love which will give a new water of life to all of us. As sons and daughters of Don Bosco, we feel very happy with your presence among us as father, brother and friend. The Salesian Congregation flourished  in our country through the courage and sacrifices of our great Salesian missionaries. They came here in two expeditions: first in 1927 until 1929 and they could not stay longer for causes difficult to explain, but the second expedition was truly fruitful: the good seed spread in good soil and continued to grow until today. Some of our missionaries returned home, some died here and other are still alive working in our Province. The small seed is growing bigger with many fruits, in many Salesian groups: SDB, FMA, ASC, ADMA, VDB and friends of Don Bosco. Besides Timor, the Salesian presence has also been flourishing in Indonesia since 1985, where now a new Delegation will begin. Salesian Family, especially SDB and FMA, doesn’t only work in this country but goes also outside as missionaries in different countries of the world. We do pray that the Lord continues blessing us, so that we may continue to work for the good of the people in the family, in the church and in the country. We hope your presence will strengthen our commitment and fidelity to our Salesian vocation. Seja bemvindo a sua casa em Timor Pe. Angel e que a sua visita se torne uma grande benção para todos nós”.

In return, the Rector Major addressed the assembly in Portuguese mixed with Spanish: “I’m deeply happy to be here with you all. Rome is very far from Timor, but not Timor far from Rome. We started from Rome on Sunday, and today is Tuesday at our arrival in Timor. We passed through Indonesia just a while, and then we will formally return for a second time. I’m really happy seeing so many young people, adults, elders, and many others from Salesian Family and I am sure that we will meet again tomorrow for the feast of Don Bosco. I have to say one thing that is really true. I come here not just because of a program that I have to come to Timor today – no, oh no. I come here because I love you all. I celebrated the first year of the Feast of Don Bosco in Valdocco (Turin), the second year in Africa, in Sierra Leone; in the third year, in Cuba, and the fourth year I decided to go to Asia. But Asia is very big. Isn't it true? It's true! And Timor is not so big, is it? All the places I’ve visited were very good but Timor is the best one to celebrate the Feast of Don Bosco. I feel very happy to greet you, my dear confreres, my beloved brother, that now a Bishop is present here among us, Fr Virgilio; dear Salesians Sisters and other sisters and members of the Salesian Family that are so lovely: I just greet you in this way but tomorrow we have to celebrate the Feast of Don Bosco. Just enough for today and obrigado, obrigado.” After speaking to the assembly, Fr. Angel went among the students and Salesian Family giving them photo opportunities and greeting them in person.

The Rector Major shared a meal with the Salesian Family in the Provincial House. He had a very happy time with some students and staff of the Provincial House. He specifically congratulated and thanked the first old Salesian missionary Fr. João de Deus Pires, SDB, for his outstanding work in the past 60 years for the foundation of the Salesian presence in East Timor. Later in the same afternoon, the Rector Major toured the compound of the Provincial House before visiting and participating in the last day of the “Novena to Dom Bosco” in the Parish of Mary Help of Christians. Fr Ángel Fernández Artime SDB, didn't seem to have much rest since his arrival from Jakarta to Dili, but he was smiling throughout his busy first day at Salesian Provincial House compound. He made every one smile, too. It was meeting the real Don Bosco, as many of the Salesian Family said after seeing Fr. Ángel on the first day.