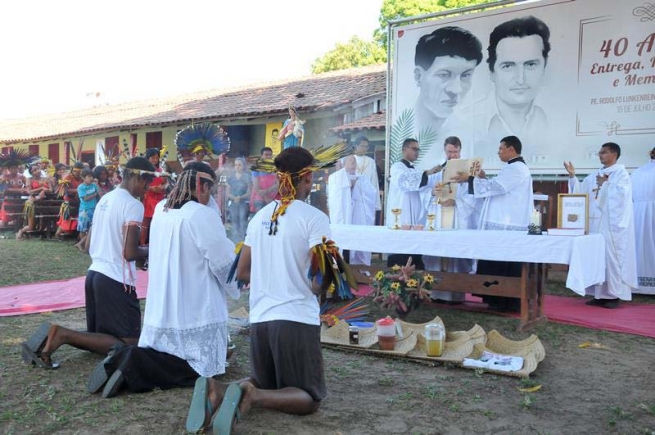 (ANS - Meruri) - "Meruri Rodolfo! Meruri Simão! Meruri, martírio, missão!" This sentence from the poem of Msgr. Casaldáliga, bishop emeritus of the Prelature of São Félix do Araguaia, is most appropriate to describe what happened in the Bororo village church of Meruri, State of Mato Grosso, Brazil, 31 January 2018. Mgr. Protógenes José Luft, bishop of Barra do Garças, officially opened the Diocesan Inquiry on the life, martyrdom, and signs of the Servants of God: Rodolfo Lunkenbein, Professed Priest of the Society of St. Francis of Sales, and the indigenous Simone Cristiano Koge Kudugodu, known as Simão Bororo, lay person.

Present at the proceedings: Msgr. Bruno Pedron, Salesian bishop of Ji-Paraná, representing all the Salesian bishops of Brazil; the Provincial of Brazil-Campo Grande, Fr Gildásio Mendes dos Santos; the Provincial of the Daughters of Mary Help of Christians of Mato Grosso, Sister Antonia Brioschi; the representatives of the Episcopal Conference of Brazil, of the Missionary Indigenous Council (CIMI), a body linked to the National Conference of Bishops of Brazil (CNBB), which, in its missionary work, gave a new meaning to the work of the Catholic Church with indigenous peoples; of the "Fundação Nacional do Índio" (FUNAI), official organization of the Brazilian government, responsible for the protection of the indigenous peoples and their lands; numerous Salesians, members of the Salesian Family and, of course, many Bororo.

Mass began at 10 o'clock before the monument erected at the site where Fr Lunkenbein and Simão offered their lives on July 15, 1976. The procession to the church followed, where, after the communion, Fr Paulo Eduardo Jácomo, SDB, Vice Postulator of the Cause, read the opening decree of the diocesan inquiry, signed by the bishop of Barra do Garças. The members of the Tribunal then took their office and took the oath, as did the experts of the Historical Commission.

"There could have been nothing better to present to Don Bosco on the day of his feast: a missionary son of Don Bosco and an indigenous recipient of his mission, walking together on the road to the altars," commented Fr Pierluigi Cameroni, Postulator General of the Causes of the Saints of the Salesian Family.

Thus continues the poem of Msgr. Pedro Casaldáliga: "In Mass and in dance, in blood and in earth, weave the alliance Rodolfo and Simão! Meruri in life, Meruri in death, and the strongest love, the mission accomplished."