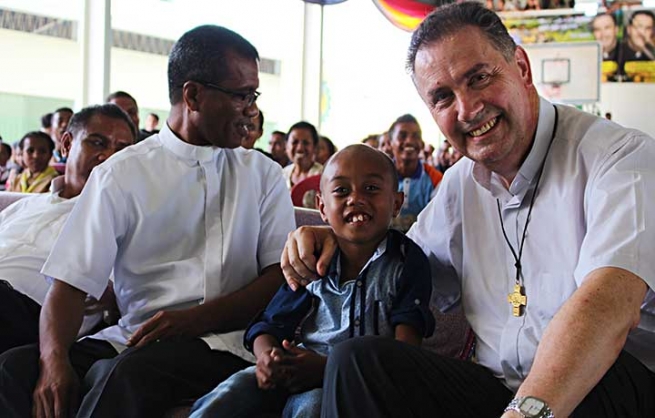 (ANS – Dili) – Finally, on the second day of the Rector Major's visit to East Timor came the most highly awaited time for the Salesians. Besides the large outdoor celebrations with hundreds of youth or Salesian Family member participating, in the afternoon of January 31, the 10th successor of Don Bosco dedicated two and half hours to meet personally with professed Salesians.

After the presentation of each local community member present in the Audio Visual Hall in Don Bosco Comoro, Fr. Ángel contextualized this meeting: since GC27 (April 2014) he has met with Salesian confreres in 59 provinces and 70 different countries, reminding all that although we celebrated the Feast of Don Bosco away from Valdocco in Turin, all of us were, however, born there as Don Bosco Salesians thanks to the Holy Spirit.

The Rector Major shared in the language of the heart (a wonderful symbiosis of Portuguese, Spanish and Italian) and mentioned six major points about the beauty and future of the Congregation in the world as well as in East Timor: “We have a great future in these two countries of the ITM Vice Province. But there is one condition: we need a clear charismatic vision!” Fr. Ángel went on to explain how the present challenges of the Congregation are to become motivations for our charismatic growth.

Among the main points emphasized was the need for growth in fraternal communion, growth in Salesian identity that needed to be consolidated, and required the solid preparation of young confreres. The important role of the Salesian Brother for the future of the charism in East Timor was stressed with force and the audience all applauded the 15 Brothers present in the hall!

With passion, the Rector Major also underlined the charismatic future of East Timor: “Your future is in the province, with a simple lifestyle, a province living with the poor and for the poor people! This is your major strength. Your main treasure is the mission for the humble and poor youth of East Timor. Don’t be misguided!”

The final part of the fraternal talk focused on vocation discernment, accompaniment of all confreres, with explicit points about the weakness and remedies for the Salesians within the worldwide Salesian community with over 14,000 SDBs and 432 novices.

What followed were a few questions about the shared participatory decision-making process, animation and government, about how to help the confreres in irregular situations. In his answers, Fr. Angel spoke of the healthy situation of the Salesians at the present time as well the duty to build strong foundations of the future province of East Timor.

The first full day of Rector Major’s visit ended with common prayer of Vespers and a fraternal meal shared in the provincial house.