Italy - Homage of the Pope and President Mattarella to Don Bosco 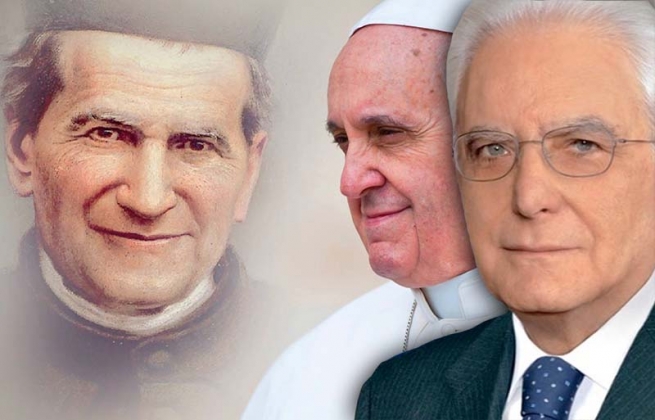 (ANS - Rome) - The Rector Major, Fr Ángel Fernández Artime, is right when he reiterates that Don Bosco and his charism are not just the patrimony of the Salesian Family alone, but of the whole of humanity. Further proof, these past few days, from the many tributes paid to the Saint of Youth by people of every background and context.

Among many, we would like to report the words pronounced on January 31 by Pope Francis at the end of the general audience on Wednesday, and by the President of the Italian Republic, Sergio Mattarella, through a special press release. After leading a catechesis on the dialogue between God and his people, the Holy Father cited Don Bosco and indicated him as a model for different social categories:

"Today we remember Saint John Bosco, father and teacher of youth. Dear young people, look to him as the exemplary educator. You, dear sick people, on his example always trust in Christ crucified. And you, dear newlyweds, resort to his intercession to take on your conjugal mission with generous commitment."

Italian President Mattarella dedicated a long communiquè to the figure of Don Bosco, and the 130th anniversary of his death.

"Today is the 130th anniversary of the death of John Bosco, founding priest of the Salesians and of the Daughters of Mary Help of Christians, an educator that Italian society has had the opportunity to appreciate for its attention to the young, for his passion, for his commitment in helping countless young people in conditions of degrading poverty and marginalization.

Humble origins were, in the life of Don Bosco, a root from which he drew permanent guidance. His intelligence, his social skills, his great organizational skills, inspired by evangelical testimony, were directed to the creation of works that have reached a large number of youths, of working children, even very young, offering them precious spaces of welcome , education, formation, solidarity, individual and community growth. He knew how to make the social issue his own and build more spaces for citizenship and belonging.

In many parts of Italy and of the world, the mark of Don Bosco, and of the congregations promoted by him, is still alive. Many Italians owe the Salesians some of their own culture, of their own formation as citizens. The continuity of Don Bosco's works represents a contribution to social cohesion and progress, values ​​that enrich a country, and help the whole community to face the challenges of the times."