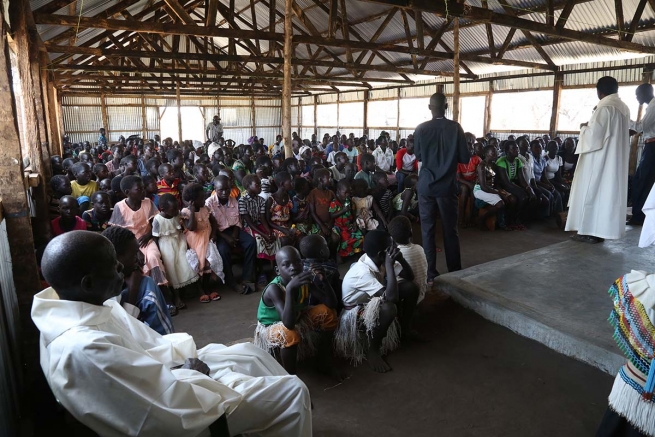 (ANS - Palabek) - "On the feast day of Don Bosco, we inaugurated with the Christians of one of the seven communities, the Salesian center in the refugee camp of Palabek, Uganda," says Fr Martín Lasarte, of the Salesian Missions Sector. "The official celebration, however, we will do on Saturday, 3 February, in the presence of the authorities of the camp and Msgr. John Baptist Odama, archbishop of Gulu."

The Salesian community counts on building primary and secondary schools, vocational training centers and, above all, offering consolation with faith and hope to all refugees.

On the day of the feast, a catechist expressed all her joy at the news of the new Salesian presence and said, "It has been 6 years that I could not participate in a Eucharistic celebration."

Fr Lazar Arasu, SDB, pioneer of the presence among the refugees, already in the camp for several months, has prepared the start of the new Salesian presence in the field, especially among young refugees; for the children, moreover, the construction of two chapels and three kindergartens has begun.

The Catholics made a gesture of generosity by donating six large plots of land for the construction of chapels and educational works for children and young people.

And it must be remembered that even the small house where Fr Arasu and the other missionaries live were made by the refugees from the camp.

As for food, Fr Lasarte continues: "It is not the Salesians who distribute food, but the refugees who support the Salesians and offer some of their food to new friends and pastors."

42,000 people are housed in the camp with an average of 300 new refugees arriving each week from South Sudan. Many others, about 1,200,000 people - especially women, children and young people - are housed in other camps.

At 5.00 pm, functionaries of the humanitarian agencies and NGOs offering help to the entire population leave the refugee camp to return to their own lodgings, in a nearby city, after a hard day's work. The Salesians, instead, remain in the refugee camp, among the people.

A short video is available on ANSChannel showing the joy of the population for the new Salesian presence.