East Timor – "You, as Salesian young people, have to do something more valuable" 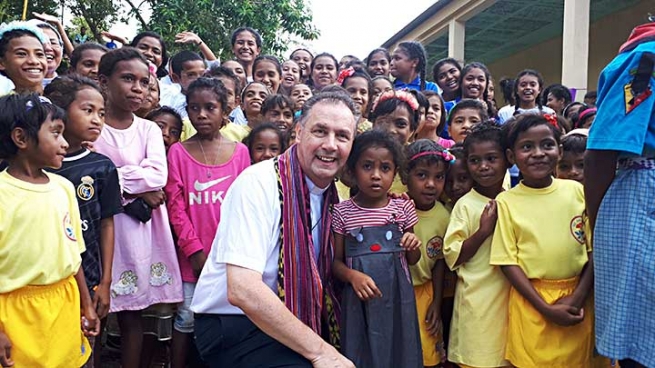 (ANS – Fatumaca) – Fr Ángel Fernández Artime SDB, the Rector Major of the Salesians of Don Bosco, doesn’t seem to have much rest since his arrival in East Timor. He was smiling through his busy first day till today. He made every one smile too. It was meeting the real Don Bosco, as many Timorese people said after seeing Fr Angel on the first day.

The X Successor of Don Bosco, who reached Fatumaca on the afternoon of February 1, concluded the appointments in that city the following day - Day of Consecrated Life. First of all, he celebrated the Eucharist for the whole Salesian Family of the eastern region of the country, together with Msgr. Virgilio do Carmo, archbishop of Dili, and numerous Salesians; then he also paid tribute to some Salesian missionary pioneers present there; then, after a festive meeting with various representatives of the many groups of the Salesian Family and a quick greeting to the Salesian community of Venilale, he returned again to Fatumaca where he met with 50 Salesian novices and prenovices.

The last encounter of the Rector Major in Fatumaca was with the 50 Timorese Novices and Prenovices. The 22 novices are being formed in the community of Fatumaca and 28 prenovices are being formed in the community of Los Palos. In the evening of 2 February, the Day of Consecrated Life, the Fatumaca Secondary Technical School Auditorium hosted a celebratory event. Together with the young Salesians, also present were Fr. Apolinario Neto, ITM provincial, several of his councilors, and most of the formation teams of both houses. The Delegate for Formation, Fr. Manuel Pinto, continued to exercise his role of interpreter into the Tetun language.

Father Angel first spoke of the necessary attitudes of the Salesians in these two important stages of initial formation: "Your personal commitment in answer to the call of God is the most important. It means to look honestly for the clear and not mixed motivations to Salesian religious life: It’s to like wanting to help the young people on their life journey with full dedication."

Then the Rector Major shared his own vocational discernment story: "Even though I didn’t know completely what the Salesian consecrated vocation was about, I was clear about giving everything for the young like the Salesians I got know."

He added a few concrete and personal bits of advice for the 16-24 year old Salesians in formation: "I’m asking you to have an honest and transparent attitude towards your own self, with the formators, in the presence of God. This will help you to be really happy and joyful. But we can’t have Salesians, who are not giving themselves completely to the young.... our life is really full of giving one self. And you need to feel in your heart that God takes His central place. If you don’t think like this, better to dedicate yourself to social work. Yes, we are called in the novitiate to discover a life totally consecrated to God. And while you give yourself completely to the young people, you will be deeply happy. This is the experience of Don Bosco."

After the talk of the 10th Successor of Don Bosco answered three questions from the novices and one question from the prenovitiate: Why did you chose to come for the animation visit to Timor this year? Why are these two stages of initial formation so important? What are your main observations about the Salesian Vice-province after three days in the country? How was your novitiate?

And as a leitmotif of the talk, again and again came the invitation to live the Salesian consecrated life with honesty, openess and apostolic passion!

On Saturday, 3 February, 2018, there was a long trip back from Fatumaca. He, then made a short stop in Baucau, an old town much by the Salesian presence and mission.

A crowd of young people and students from various school lined up with solemnity to welcome him with beautiful songs of Dom Bosco. At about 1 pm Rector Major arrived in Dili. After lunch and a short break, the Rector Major, accompanied by Fr. Klement, SDB, and both Provincials of the SDB and of the FMA, was welcomed by hundreds of young people of the Salesian Youth Movement gathered in Don Bosco Hall at Comoro Dili.

The Rector Major, who throughout had a smile on his face, was happy to see young people surrounding him. He listened to the welcoming remarks given in Spanish by a youth representative, and was asked to give a conference. Even it had not been requested before, Fr. Ángel gladly talked to the young people from his heart. “My dear young people, the bright future of East Timor is very dependent on you. Sometimes young people think to let others do important things, and I do other things, but it is not like that. You, as Salesian young people, have to do something more valuable, such as peace, justice, opportunity for all, honest work, and to reflect on the value of being a good Christian and an honest citizen. I’m very glad that today all Salesians in 134 nations look at East Timor.”

The Rector Major then stressed the importance of education and formation of each and every one of them. As he did in previous places, Fr. Ángel lightheartedly welcomed each group of young people for a photo session. After a brief rest, he gathered the young people in the parish church of Mary Help of Christians to celebrate the Solemnity of St. John Bosco.

In his homily, Fr. Ángel called that young people share their joy and happiness, that they come together and be with one another, yet they must live in the presence of the Lord Jesus and seek Mary for God’s blessings.

After the Mass, there was dinner for all hosted by the SYM of both SDB and FMA, part of the final program of the day, which included a cultural evening graced by the presence of the Rector Major accompanied by both Provincials of SDB and FMA, and Fr. Klement. There were beautiful performances from the young people of the different communities in the vice-province. After the performance, these communities offered their gifts to the Rector Major. Finally, Fr. Ángel gave the Good Night Talk, recalling the good things that happened during the day, spoke of the family spirit among the young people and their sympathy and generosity towards one another. He ended the day by joining in cultural dances with the young people.

Yes, it was a truly joyful celebration for the young people who have embraced and lived the spirit Don Bosco.