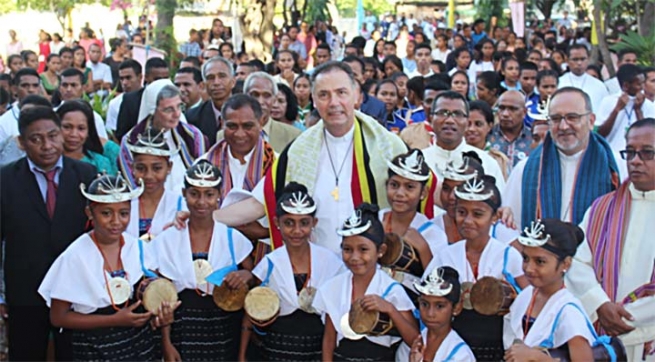 During Mass, the Rector Major received the 24 new Salesian Cooperators. Ten of the new fully-fledged Cooperator members are from Venilale, 14 from Dili. There are three ASC centers in East Timor with a total of 101 members and tens of aspirants. According to regulations, the period of initial formation lasts two years, during which a person discerns God's call to become a member. Upon completion of the two years, the candidate is inducted by making their Promise, a commitment to live the life of a Salesian Cooperator forever.

The important way of living in Salesian life and mission

"We need to make sure that the way of living the Salesian life and mission today is the following: the time of the great missionaries is over and I don’t see among the rectors any missionaries. And the path of the province is going in a mature way forward. So you need to care a lot about the life of the community and our communion. More important than our work is to have a communitarian working style that will change our mission."

The important of accompaniment

"How many of you have practical trainees? All of the houses! We should not just ‘distribute’ them among the houses. The young confreres are entrusted to you in order to help them grow in their vocations and missions. We need to help them via good accompaniment. We need to show more our own way of being educators and evangelizers in a Salesian style, take care more about the community life and strengthen the formation process. God willing, next year you will have more than 60 confreres in initial formation. If we do formation well, in the next 6 years, without any other issues, the Vice-province can have more than 40 new SDBs! That means to lose only 35% and 65% will remain. Your numbers speaks about many possibilities. But more important is the style of the new Salesians. We need to put more energies into this. We can’t be allowed anymore to be Salesians without passion, wanting to live a comfortable life. We need to do all our best to dedicate ourselves completely to the young."

The important option for the poor

"Never forget the poor young people in our houses. What I have observed these days, we are living and working among humble and poor people. Careful: economic difficulties should not put into your hearts the idea that we should change just for survival. We need to look for funds. There should be a charismatic agreement on our destinataries within the whole ITM.

The province should think in fraternal dialogue, and with the RM & his Council, and to reflect on what new mission path we can dream about in the future! If we leave two-three works to the bishops, where would we like to go? There are possibilities of maturing some concrete new projects. But the vision should be clear: how to help the poorest. Yes, we don’t need to reject the parishes, but the missionary task should be first. The education possibilities should be our priority, like VTC and/or schools, the Oratory or Youth Center, youth groups and SYM. Yes, you need to work our criteria."

The importance of the Salesian Bulletin

"What is the importance of the Salesian Bulletin? Yes, in East Timor the SB is very important! SB should become an important instrument in our mission, a door to get know our Salesian mission and vocation promotion tools. But with 300 copies of the SB we can’t do much. We need to study how to do it cheaper with larger distribution, also with possible help from the whole Congregation.”

In his conclusion, the Rector Major called to the Rectors to share their loving kindness with the poor people: “You have the great treasure of many simple, humble and poor people around you. You need to welcome them with much Salesian loving kindness, not to solve all of their problems. But we can’t treat them as ‘herds’. Care for some, be a father... If you lack humility, your clericalism does nothing but hurt and damage."