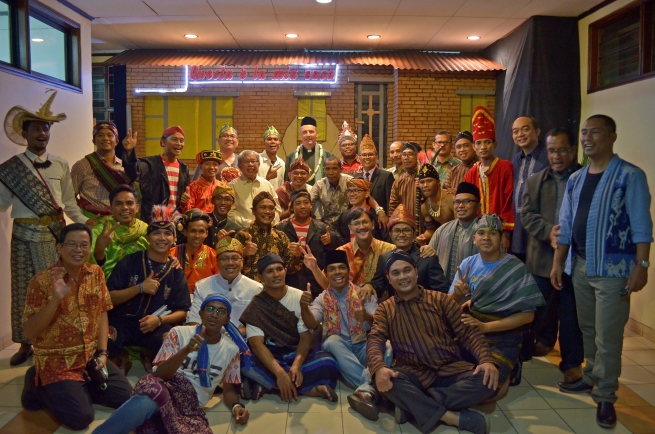 (ANS - Jakarta) - The Rector Major, Fr Ángel Fernández Artime, reached Indonesia on the afternoon of Monday, 5 February, where he continued his Animation Visit to the "San Callisto Caravario" Vice-Province of Indonesia-East Timor (ITM).

On Tuesday, February 6, 2018, the Major Rector met with Salesian novices to whom he offered several guidelines, the first being to know, as novices, what it means to be a Salesian, while the second was his invitation for them to spend time during the novitiate to discover and find how truly passionate their call was. He said that if they wanted to be an apostle of young people, then the choice to be a Salesian was, indeed, appropriate.

During the question and answer session that followed, the Major Rector was impressed with the candid honesty of the novices. Of the 12 novices who attended, three decided to become coadjutors, while two novices chose to be clerical Salesians; the others are still in discernment. According to the Rector Major, this is a good and healthy state to be in because during they must find their calling during the novitiate.

On the same day, after meeting with the novices, the Rector Major met with a large family of Indonesian Salesians. A few important points that should be the responsibility of the Salesian Delegation of Indonesia:

1. Indonesia is the largest Islamic country in the world, hence it is very important for Salesian Indonesia to learn to cooperate with Muslims in developing Salesian charisma in Indonesia. This is a Salesian reality in Indonesia that works to serve the young, who are predominantly Muslim.

2. The Salesian Delegation of Indonesia has hope and a convincing future with the requirement that every Salesian understand the Salesian charism. Salesian charism is not based on many school buildings, magnificent churches, modern technological tools, but rather lies in a lifestyle that is always close to and serves young people.

3. To instill a Salesian charism, the Salesian Delegation of Indonesia must have qualified formation stages. Qualified ongoing formation is a guarantee for the future of a large congregation.

4. It is important for every Salesian to pay attention to the maturity of affection, personality, sexuality and maturity of faith. The logic of maturity of a Salesian is not based on age, but on continuous formation.

5. Regarding the life of the community, the Rector Major reminded the Salesians to care for the values of community life. Community life, he said, does not mean first to live in the same place, but to offer a testimony of life together filled with a sense of kinship, a spirit of togetherness, open communication.

During the rest of the day the Rector Major had the opportunity to meet and learn about the local Salesian Family, presided over the Eucharist, and ended the day by attending the festive cultural evening animated by the Salesians of the various communities present in the country.

Finally, it should be noted that today, Wednesday 7 February, Fr Á.F. Artime was especially interested in greeting, via a video call, the 8 Salesian prenovices that, having remained in Sumba (1700 km from Jakarta), did not have the opportunity to meet him personally.