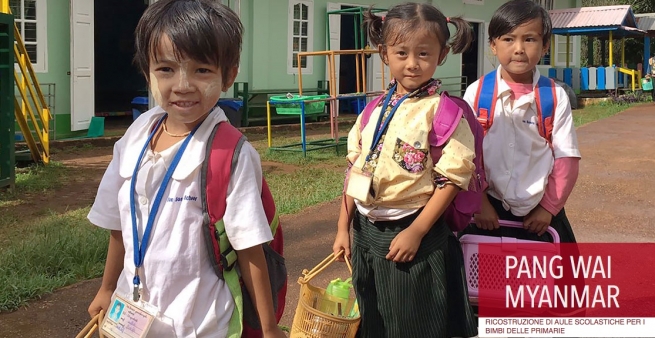 (ANS - Pang Wai) – To establish a small network of primary schools in the area around Pang Wai, a territory in the North East of Myanmar inhabited by isolated tribes of animist faith, where the practice of cutting the heads of enemies and traitors: what the Salesians of Don Bosco are working on, thanks to their patiently establishing a relationship and gaining the trust of the local tribes.

For the central government of Naypyidaw, the area of ​​Pang Wai, on the border with China, is a region of extremely dangerous rebels. It is a mountainous area, characterized by precious stones mines, especially rubies. Hunting is the source of basic food sustenance, but also the reason for repeated conflicts between one village and the next.

Clearly, creating a large educational project in that reality is not the easiest of tasks, but the Salesians intend to open several small schools in four villages. First, by restoring and re-using a number of old school buildings, long neglected, now animal shelters. After more than five years of neglect, in fact, many roofs have collapsed, or are crumbling, the walls dirty, fallen in. For this reason, the Salesian Mission Office in Turin - "Missioni Don Bosco" - has already been at work to make it possible.

The Salesians of Myanmar want to focus on the education of the youngest children, teaching them with the basic principles of respect for human dignity and social life. The school will bring together the children of the village up to the ages of ten-twelve and educators will begin to teach them to read and write with activities and group games. The tribal chiefs agree and this is a guarantee of security and community involvement.

The authorities of the country periodically carry out "land reclamation" campaigns that end up in clashes where the dead are always too many, a campaign wherein the complacency of foreign mining companies is not difficult to see. The local bishop launched an invitation to the Salesians to take care of the local populations, bringing the Gospel to them, but necessarily passing through the preservation of their local identities and capabilities.

A mission ad gentes in the proper sense. The young are many. How the Sons of Don Bosco refuse, say no?