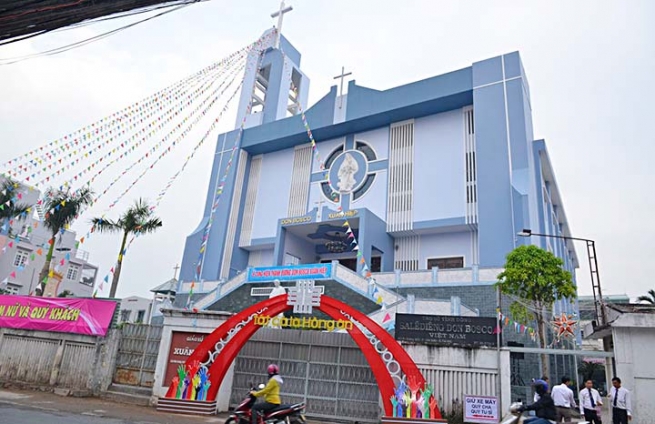 Three years ago, VietNam province decided to build a new church dedicated to Don Bosco on the occasion of the 200th anniversary of his birth. So, erected at the façade of the new church was a 3-meter high statue of Don Bosco which was blessed by Fr. Joseph Nguyen Van Quang, the Provincial, this past January 28. This statue was put on a big one-meter high rock.

At 9:30, the Archbishop of Saigon, Msgr. Peter Bui Van Doc, and the Provincial, Fr. Joseph Nguyen Van Quang, performed the ribbon cutting ceremony before the door of the new church and unveiled the commemorative stele. Then Fr. Joseph handed the key of the new church to Archbishop Peter, and he, in turn, handed it to the Fr. FX. Nguyen Trung Thanh, the parish priest of Xuan Hiep parish. The door was then unlocked and opened by the parish priest, and Archbishop Peter led the procession into the church.

After the liturgy of the Word, the Archbishop of Saigon diocese, Mrgs. Peter Bui Van Doc, consecrated the new church and the altar.

By the end of the solemn mass, the Provincial, gave thanks to the Archbishop Peter, Bishop Peter, benefactors and all those present at this event.