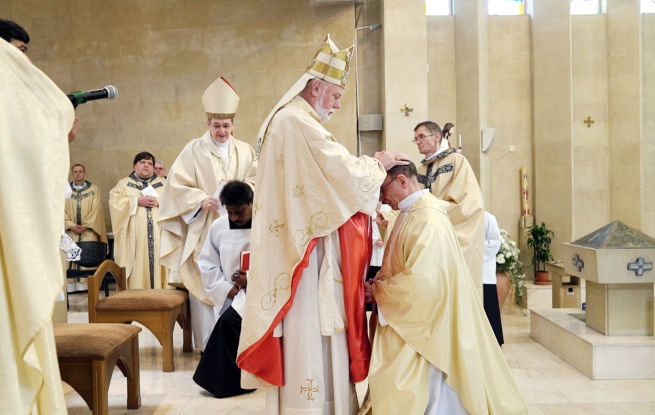 (ANS - Baku) – Celebrated on Sunday 11 February, in the church of the Immaculate Conception in Baku, was the episcopal ordination of Msgr. Vladimír Fekete, SDB, Apostolic Prefect in Azerbaijan, elevated to episcopal dignity by Pope Francis on 8 December, 2017.

"With this decision, the Pope wants the Church in Azerbaijan to progress under the bishop's paternal guidance," said Msgr. Gallagher. "The life of Msgr. Fekete represents the adventure of faith. When he discovered his vocation, in his homeland, Slovakia, he could not live it in freedom and so spent the first years of priesthood in hiding. This man who is ordained today has shown great courage, which translates into a true spirit of service, as an authentic Son of Don Bosco," he added.

After the celebration, Msgr. Fekete also wished to say a few words. Aimed at members of the small Azerbaijani Church, he said: "My heart, my strength, my time and all that I have belongs to you and so will it continue to be. Thank you for your support and cooperation."
Then, addressing the numerous ecclesiastical figures present, he added: "Dear brothers in the episcopate, you have been very close to me in the last years of priestly service. I truly appreciate your presence here today. The same applies to you, dear brother priests, my closest relatives, faithful of my hometown, and especially all the brothers and sisters of the Salesian Family."

Meaningful, too, the choice made by Msgr. Fekete on the episcopal motto: the first bishop of the Azerbaijan Church chose the first part of the Salesian motto, "Da mihi animas", or "Give me souls”, as a reminder to always work for the salvation of the souls entrusted to him.