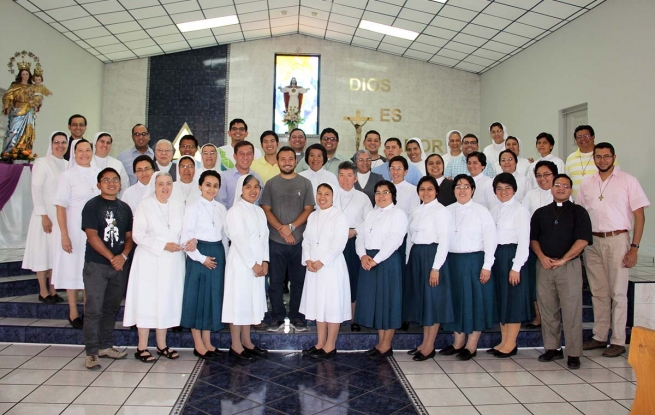 (ANS - Santa Tecla) - In 2015 a meaningful initiative was born regarding one of the fundamental topics of religious life: vocations. Adhering to this project were the Daughters of the Divine Savior (HDS), the Daughters of Mary Help of Christians (FMA) and the Salesians of Don Bosco (SDB), who wanted to join forces in the field of Vocational Animation (AVOCA) for Central America.

From February 17 to 21, at the "Santa Inés" Institute of Santa Tecla, a group of 43 participants from the three congregations in the North zone of Central America met to take part in a course of animation, accompaniment and discernment led by Fr José Ángel, diocesan priest of the Vocational Animation Community of Mexico.

The topics covered were: the basic approach to the general doctrine on vocational ministry, vocational discernment and vocational accompaniment.

"As a result we expect that the vocations promoters of the three congregations have the tools best empowering them towards vocational promotion," said Sister Eva Doris Rosa, FMA vocations manager for the North zone of Central America.

The idea of ​​uniting efforts in this task has brought vocational benefits to the various Congregations. The young people of the various groups, schools and youth ministry centers found their vocations or displayed a vocational restlessness open to religious life.

"We are reviving enthusiasm in seeking vocations. We feel very happy because we are fulfilling those expectations that we had at the beginning of the meeting," added Sister Roxana Mejía, provincial commissioner for HDS vocations.

In religious communities there is a very important figure: the vocational animator, whose mission is to form groups, accompany young people, put forward vocational proposals and help them discover what God wants for them.

"This is what is called vocational culture. The Church is insisting on these kinds of tools and attention to undertake this path with determination and to commit itself to implementing a vocational culture, open to the various vocations for the Church, for our congregations and for society," said Fr. Guzmán.