Italy - "How can you forget ...?" The indelible memory of a battered Syria in the words of Br Pettenon 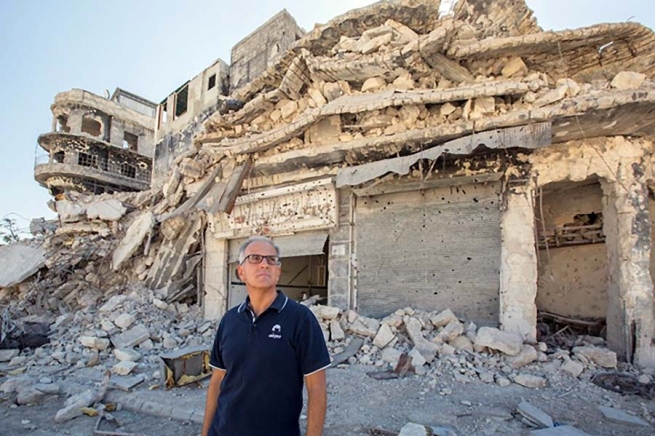 (ANS - Turin) - "Dear friends, yesterday, while reading the news of the press agencies, my blood froze in my veins on news of the interruption of the Salesians' activities in Damascus due to the dramatic situation the Syrian capital is experiencing during these days of intense fighting. Only four months ago, we were in Damascus, their guests."

I see once again the faces of the young people we met, of the Salesians of the local community, of the adults who gravitate around the oratory for cooking, cleaning and maintenance services. In October, everyone was full of hope for the fragile truce that existed at that time and everyone hoped the worst was over. Unfortunately, it was not to be.

If the director - Fr Munir - and the confreres of the oratory have decided to close the oratory to avoid further risks for the lives of the young people who attend the center, it means that the situation is truly dramatic. How can we forget the tears that flowed abundantly when they told us about the fear they experienced during previous bombings? How can we forget the names of their relatives they described to us before a grenade or mortar shell wreaked havoc of their lives? How can we forget the great dignity and authentic faith of these people, innocent victims, who did not stop to cry about the drama being lived, but were instead ready to tell you about their dreams and hope for the future? How to forget all that?

In a few days they have returned to the terror of glass shattered by the explosion of bombs, to the lack of electricity for much of the day, to the lack of food because going shopping is a risk, and then, where to buy anything? The markets and the shops struggle to supply themselves with foodstuffs to be sold because transport is almost completely interrupted; the streets are the most dangerous places ... Not to mention the strong psychological pressure that fear holds on everyone, including the Salesians who do not open the courtyard doors to the boys, but continue to welcome fathers and mothers of families who come knocking discreetly at the door asking for help to eat something ...