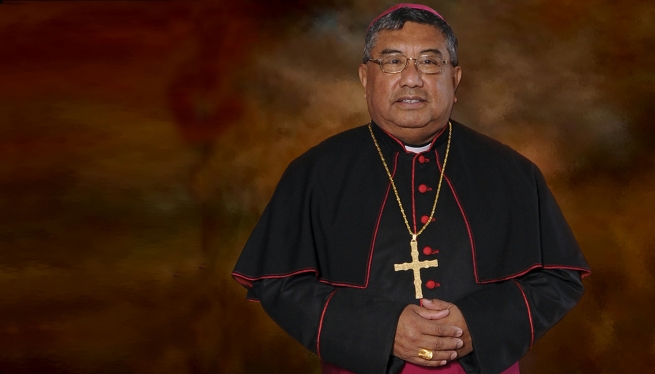 (ANS - Guatemala City) - In the early hours of Saturday, February 24, in the commemoration of Mary Help of Christians, according to the Salesian tradition, the Lord summoned Mgr. Óscar Julio Vian Morales, SDB, archbishop of Santiago de Guatemala to Himself.

After receiving the comfort of the sacraments, together with all the necessary care from the staff of the Esperanza University Hospital, Msgr. Vian passed away.

"We express our condolences to the Salesian Congregation, which in Monsignor Vian offered one of his sons to the service of this particular Church, a true disciple and missionary of Jesus and a follower of the teachings of Don Bosco: he lived with his feet on the ground, but with his gaze and his heart fixed on the Sky" were some of the words written in a statement released by the archdiocese.

Óscar Julio Vian Morales was born in Guatemala City on October 18, 1947. Ordained priest on August 15, 1976, in 1980 he obtained a licentiate in Liturgy at the Pontifical Athenaeum "Sant'Anselmo".

On 30 November 1996 he was appointed vicar apostolic of El Petén and titular bishop of Pupiana. He received his episcopal consecration on 1 February of the following year.

He worked tirelessly in the Department of Petén (the department with the largest territorial extension of the country, located in the North, on the border with Mexico and Belize). His pastoral action was based on a principle: "I will be a petenero among peteneros ... I want to listen attentively to the faithful and work according to the needs of the people."

On 19 April 2007 he was transferred to the archdiocese of Los Altos, Quetzaltenango-Totonicapán, and on 2 October 2010 he was called to replace Cardinal Rodolfo Ignacio Quezada Toruño as metropolitan archbishop of Guatemala.

Fr Manuel Chilín, parish priest of the church "El Calvario", spoke of the last moments of Msgr. Vian Morales: "I can say that he was very serene, peaceful and with a smile on his face."