Ecuador - Cherish the historical memory of the centers: Salesians and lay people 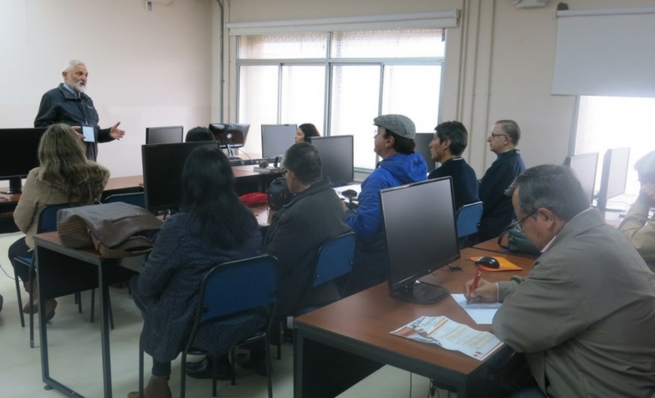 (ANS - Quito) – On reading the first "chronicles" of the early days of Valdocco, readers feel transported back to the time and era of the origins. In fact  "since 1860," wrote Fr Arthur Lenti, SDB, "some Salesians who lived with Don Bosco began to gather information on what they had seen and heard, with the conviction that something extraordinary was happening among them."

These sources, then called "chronicles" became the only source for talking about Don Bosco. "A 'chronicle' is a report written at the time the event occurred or very close to the occurrence," says Fr Lenti. To promote the work and knowledge in this very field, on 22 and 23 February, the persons in charge of the chronicles met in the Salesian Province of Ecuador. It was an original event because it summoned not only Salesians, but also lay people.

The event began with a welcome from Fr Juan Bottaso, Director of the Salesian Historical Archives, who observed that at present there is a real risk of losing the roots or memory due to the supremacy and immediacy of events. This is why the role of those in charge of the chronicles in the various Salesian houses is important, people who "are custodians of the memory of the centers, of recording and archiving what happens," he added.

The importance of having an audiovisual archive was also emphasized, the audio-visual history being as important as the written history. The need to classify this type of AV material was insisted on so it too becomes a source of and for consultation.

Other topics discussed were "the journalistic chronicle and the use of historical archives", curated by Xavier Reyes; "Photography as historical record", by Carlos Martinez; and "chronicles and platforms / digital formats", thanks to the intervention of Armando Cuichán.

The second day dealt with the topic of "Salesian history." Ms. Tatiana Capelo presented the project to make the history, the mission and the vision of the missionary presence and work visible to the public.

In the same way, Angelica Almeida, assistant of the Salesian Historical Archives, showed the first chronicle of the Salesians arriving in Ecuador and two letters written and signed by Don Bosco himself.

Safeguarding the historical memory of Salesian works is the main task of the person in charge of the news or chronicles. It is important to form and train not only the Salesians, but also the laity who will have to take on the responsibility of leaving traces for history.