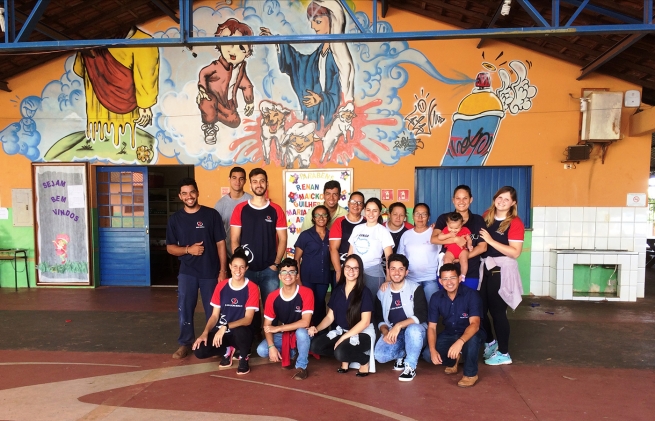 (ANS - Campo Grande) - The latest UNICEF and World Bank data state that "385 million children live in extreme poverty."; "In the world it is estimated that around 145 million children live on the streets."; "About 60 million children in Latin America are victims of all kinds of abuse." Frightening figures. The Salesians in many parts of the world work like "ants" in favor of children and young people: not very visible, but decisive. "Casa Don Bosco" in the district of Taquaral Bosque, in Campo Grande, has been serving the most disadvantaged for 29 years.

Casa Don Bosco has commemorated the date to remind all Salesians, educators and people who were part and continue to be part of the activities of the center. The Salesian house is a social center that offers socio-educational and human development in the style of Don Bosco to children and adolescents aged 6 to 15 in a situation of vulnerability and socially at risk and who reside in the district of Taquaral Bosque.

During the day, the children receive food and are offered sports, artistic and cultural workshops, always in the light of Don Bosco's Preventive System, which focuses on the triad: reason, religion and loving-kindness.

Casa Don Bosco began its work on 21 February 1989. Its headquarters were opened amid a thousand challenges and at the beginning it was a shelter for children and teenagers who lived on the streets, with headquarters at "Barão do Rio Branco" street. Then the headquarters was moved to a plot of land in the neighborhood of Bosque Taquaral, donated by public authorities, and activities began at the chapel dedicated to Don Orione.

With the creation of this new project on the outskirts of the capital, the Salesians started the "Don Bosco House", which went to serve about 200 children and adolescents every day as direct beneficiaries, without counting the indirect support offered to families.

There are millions of children and teenagers whose home is the street, who go looking for food in the trash and have drugs as their street companions. Casa Don Bosco celebrates 29 years at the service of the most disadvantaged. It does not take care of millions of children, but continues to save those children that God places on its path.