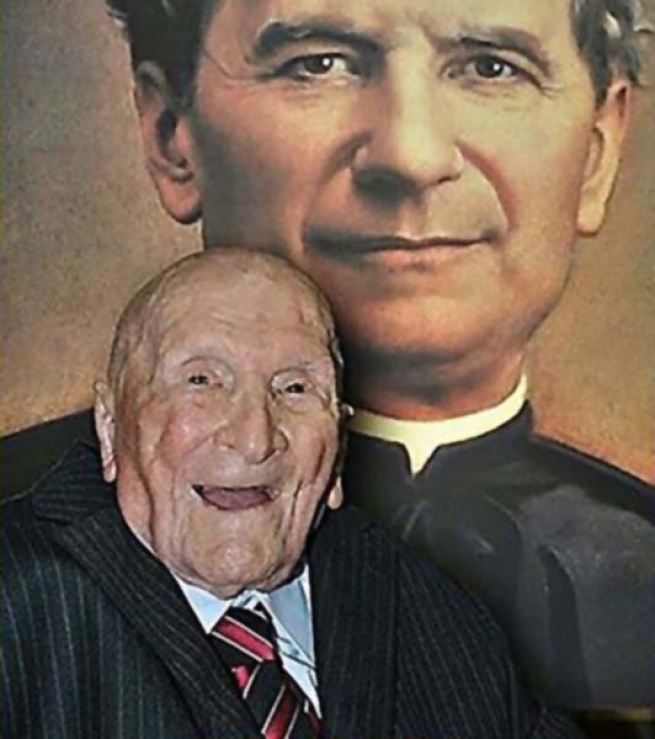 (ANS - Caracas) – He was born in 1911 in Riese (today known as Riese Pio X, in honor of its most illustrious fellow citizen) Giuseppe Berno. Mamma Antonia chose his name: "He will be called Bepi, like the Pope (Giuseppe Sarto, Pius X, reigning at the time), because I want my son to be a priest, like him." And in fact, little Giuseppe became a priest and a Salesian who celebrated his 107th birthday a few days ago, the oldest Salesian in the Congregation.

The Salesian history of Fr Berno first begins in Legnano and continues in Trento with his first years of formation and preparation for the novitiate. He made his first religious profession in Este on 1 September 1929. In that same year, just eighteen, he asked to leave as a missionary for Venezuela, a country that would become his second homeland.

He made his perpetual vows on 11 September 1932, was ordained a deacon in 1937, and in 1938, on 30 October, the feast of Christ the King, he was ordained priest at La Vega - Caracas by the laying on of hands and the consecratory prayer of Msgr. Luigi Centoz, the country's Apostolic Nuncio at the time.

In 1961, already aged 50, he was invited by the then Apostolic Vicar of the Amazon and Upper Orinoco, Msgr. Segundo García, to work as a missionary in those lands. He accepted immediately and unconditionally.

He was called to travel into the hostile forest, its overflowing rivers and the thousands and thousands of natural channels of water. Everything was done to everyone, as Saint Paul said, to try to attract someone to the proposal of the Gospel.

Also famous for his maps of the Upper Orinoco, for his study of native languages, for his interpretation of the signs and sounds of those cultures, in 1987, at the age of 76, he returned to Puerto Ayacucho, and from 1990 to 2009 was its vice-parish priest until, nearing 100, he was transferred to Caracas.

His life is a testimony of fidelity and generous dedication to the service of God and of men.

Last Saturday, February 24, he celebrated 107 years of life, 89 years as a missionary in Venezuela, 86 of perpetual religious profession and 80 as a priest.