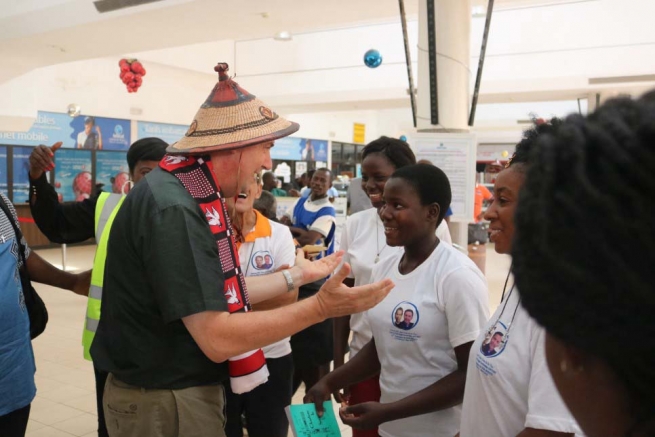 (ANS - Ouagadougou) - The Animation Visit of the Rector Major, Fr Ángel Fernández Artime, to the Province of Western Francophone Africa (AFO) continues. The X Successor completed his stay in Mali on Tuesday 27 February and he subsequently reached Burkina Faso, stopping in the country's two major cities: Ouagadougou and Bobo-Dioulasso.

On Tuesday afternoon, accompanied by his Secretary, Fr Horacio López, Fr Á.F. Artime visited the house of the Daughters of Mary Help of Christians (FMA) in Niamana, a rural village in Mali where he offered his message of hope and comfort to the many children, young people and educators present.

On returning to the Salesian center "Père Michel" of Bamako, the Rector Major spoke with the representatives of the Salesian Family, and shared the traditional Salesian "Good Night". The day was further enriched that evening by his meeting with the archbishop of Bamako, Cardinal Jean Zerbo.

The following day, the X Successor of Don Bosco was welcomed at the Ouagadougou airport by a delegation of young people, Salesians and FMA. The next stop was the Salesian Vocational Training Center where - after the traditional reception ceremony, which saw the participation of the Center's Economer, Fr Bruno Gossa, students and a district manager - Fr Á. F. Artime blessed the construction of the new Salesian house and was audience to a festive cultural show.

Yesterday, Thursday, March 1, the day was marked by the celebrations for the 25th anniversary of the Salesian presence in Bobo-Dioulasso. The Rector Major, who arrived in the city early in the afternoon, greeted the pre-novices, met the local Salesian Family and presided over the solemn Eucharist for the anniversary.