Belarus - Don Bosco is very present in the country 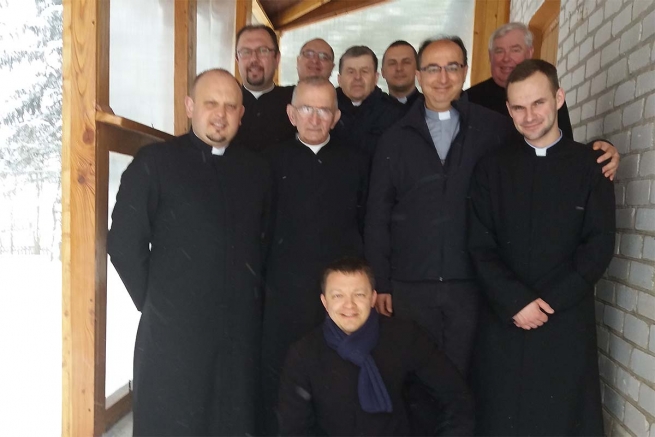 (ANS - Zhuprany) - Belarus is a country that has suffered greatly during the second half of the 20th century and for various reasons children's rights have struggled to find a decisive place in the country. Today in Belarus there are a dozen Salesians among young people, adults and the elderly in the home in Zhuprany. On the occasion of the feast of Saint Casimir, on March 4th, everyone gathered, coming from the communities of Smarhon, Minsk and Baraulany. No one minds having to travel for up to two hours on a snow-covered road, because they know that with fraternal sharing and meeting the Salesian charism is strengthened

They speak enthusiastically about the new projects, the construction of the new church and the headquarters of Minsk, the capital of Belarus. They show the plans of the new church in Baraulany and discuss how to rebuild the Salesian oratory in Zhuprany or the new activities for young people in Smarhon.

Perhaps they do not know this clearly, but they are tracing the path of a promising future for the Salesian Congregation in Belarus. When Don Bosco sent the first Salesians out of Valdocco, he said to Fr Michele Rua, "The oratory is in you." And Fr Rua's immediate reply was, "In Mirabello I will do as Don Bosco."

The first Salesians in Belarus are sowing the Congregation and to some extent they feel in their hearts the enormous responsibility and honor of being bearers of the Salesian charism in this beautiful country.

Indeed, there is no lack of enthusiastic young people: in the youth centers of Minsk, Smarhon and Baraulany, there are many young people willing to collaborate with this handful of men full of God, who sit for hours in the confessional, who travel on icy roads to create fraternity, who end the day chatting with young people, playing with them, talking about their problems and their dreams, and that every day in the small community chapels they ask God for the light and the strength to carry on Salesian works, for the greater glory of God and the salvation of the young.

In a short time the Salesians can already count on several aspirants who have started the community experience in Minsk.

The Salesian Congregation shall have a beautiful future if it succeeds in transmitting to young people the idea that "giving oneself completely to everyone" can fill an entire life and make it whole.