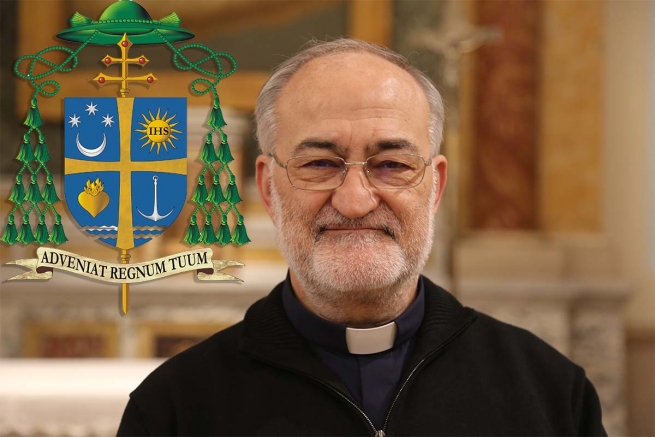 (ANS - Rome) - With a Mass and subsequent sharing with members of the Provincial House of Seville, the recently appointed Archbishop of Rabat, Morocco, the Salesian Msgr. Cristóbal López, SDB, offered his greetings to his confreres as Provincial of the Province of Spain-Mary Help of Christians. He then travelled to Rome to meet the Rector Major, and later, the Holy Father. Next Saturday, 10 March, he will be ordained in the presence of the same Fr Ángel Fernández Artime. Below, his choices for the motto and the episcopal coat of arms.

In a sense, a bishop's motto also represents a pastoral program: "Adveniat Regnum Tuum" (Your Kingdom Come) is the motto chosen by Msgr. López who explains it thus: "It expresses my conviction that the Lord calls me and calls the whole Church to be a sign and an instrument at the service of building the Kingdom of God, which is a kingdom of peace and justice, freedom and equality, of life and truth, of love and solidarity."

"I understand that in many parts of the world this phrase is conceived as the mission to make the Church great, so that there are more Christians, more vocations or more chapels ... The mission is not to make the Church, but to build the Kingdom of God, full of peace, justice, freedom, life, truth and love."

The emblem itself features many profound meanings, but there is one especially worth emphasizing. "Some waves cross the lower part of the coat of arms, reminiscent of the presence of the sea in Almería, his native province; in Badalona, where he lived; and now in his new destination, Rabat. But that double groove or wave also wants to recall the meaning of 'bridge': Kenitra, a Moroccan city where Fr López was Director of the local Salesian school, in fact means 'little bridge'. All this therefore symbolizes a bridge between Europe and Africa, Muslims and Christians, North and South, rich and poor."

The appointed archbishop of Rabat will be consecrated on 10 March at 10:30 in the cathedral of Sant-Pierre in the Moroccan capital. To consecrate him there will be the cardinals Omella (Barcelona) and Amigo (emeritus of Seville), and the Apostolic Nuncio in the country, mgr. Vito Rallo. In addition, 16 other bishops are expected, including four Salesians: Olaverri (Point-Noire, Congo), Nguema Bee (Ebebiyin, Equatorial Guinea), Biord (La Guaira, Venezuela) and Godayol (emeritus of Ayaviri, Perú). Finally, about 75 priests will concelebrate and about a hundred people from Spain are also expected.