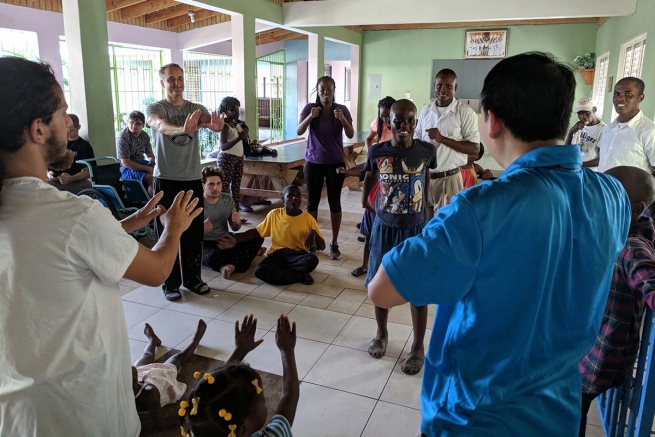 (ANS – Cap-Haitien) – Over the winter break in February, four students from Don Bosco Prep High School in Ramsey, N.J., along with their chaperones — Fr. Paul Chu, Bro. Travis Gunther, Salesian candidate John Castonguay, and two parents — traveled to Haiti to spend the week assisting the Missionaries of the Poor in Cap-Haitien, Haiti.

The main days of the trip were spent at the Missionaries of the Poor in Cap-Haitien, where there is an adult community as well as a children’s house. The 80 members of the adult community have some form of physical disability, some also a mental disability. The students spent their time feeding and communicating with the adults, as well as helping with shaving their beards, cutting their hair, and clipping their nails.

The children’s home housed about 30 kids with a full range of abilities and disabilities. The boys helped bathe the children, some of whom were completely helpless and needed assistance with both bathing and dressing. The students also played with the kids and assisted with feeding them.

With both groups the boys shared smiles, laughs, and prayers. “It was nearly impossible to see the weakness of those we served and not recognize our own weaknesses,” said Bro. Gunther.

There were several other events that profoundly affected the DBP youths. The students witnessed two funerals, one for a little boy and one for an elderly woman, assisting in her burial. They were humbled by the dignity with which the community embraced the deceased in prayer and reverence.

The group also shared a visit with Fr. Stra, a Salesian working with the street children near the Salesian compound. One of the most poignant lines he shared with them was about the moment in his life when he saw how the street children were treated and thought, “I will no longer give money to them, I will give my life.”