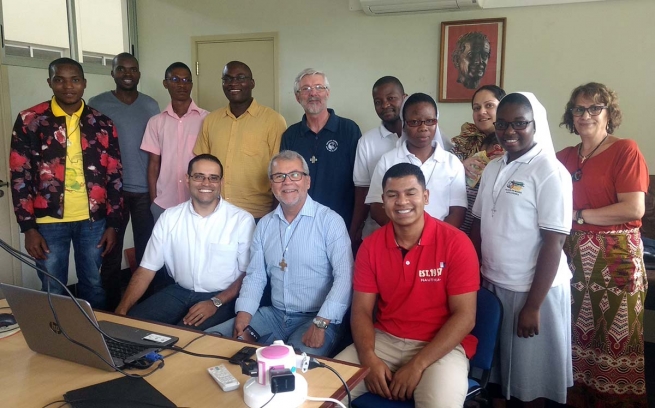 (ANS - Maputo) - Since January 28th, the General Councilor for Social Communication, Fr Filiberto González, has been on Extraordinary Visitation to the "Mary Help of Christians" Vice Province of Mozambique (MOZ). On the morning of Saturday, March 10, Fr González animated a formative moment for the coordinators of the Social Communication of MOZ, which was also attended by several representatives of the Daughters of Mary Help of Christians of Mozambique and members of the Province of Angola. The meeting opened with the prayer of Fr Francisco Pescador Hervás, Vicar of MOZ.

"I come on behalf of the Rector Major, Fr Ángel Fernández Artime, to evaluate the status of the charism, mission and Salesian charismatic identity here in Mozambique, especially among my Salesian brothers and also with the laity, who are the great collaborators of the Salesian mission," said Fr González in his presentation.

Then he gave life to the formation session, divided into two parts: in the first, he spoke about the message of Pope Francis for the 52nd World Communications Day, entitled "The truth will make you free (Jn 8:32). Fake news and journalism of peace."

A brief interval followed during which the Provincial, Fr Marco Biaggi, presented the two missionaries of Canção Nova, Fr Ademir Costa and the seminarian Lucas Paulino da Silva, who had just arrived from Brazil. Canção Nova, the 25th group of the Salesian Family, has just begun its presence in Africa, from Mozambique.

In a second moment, the General Councilor addressed the theme of the "Salesian Presence in the Social Networks", Proceedings of the General Council 423 of the Salesian Congregation, a theme chosen by the participants themselves. "Communication is one of the three great pillars of Salesian identity," said the General Councilor. "We are evangelizers, educators and communicators of God's love for the young. We help young people to see the essence of each person. It is not about teaching to read or do math, but about helping to show young people that every person is the face of God."

For this reason, Father González underlined the importance of the correct use of social networks and the concern of the Congregation so that not only the Salesians of Don Bosco, but all lay collaborators use social networks with proper awareness and understanding. "This is why this moment is also historical, because we have here two Vice Provinces: Mozambique and Angola, Salesians, Daughters of Mary Help of Christians and lay collaborators," he concluded.