Morocco - Ordination of Archbishop of Rabat, Msgr. Cristóbal López, SDB: "The principle service ... is the service of love" 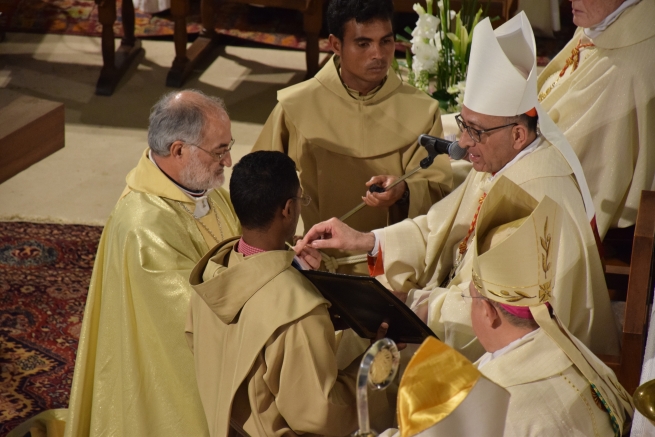 (ANS - Rabat) – On Saturday 10 March, Fr Cristóbal López Romero, SDB, was ordained as the new archbishop of Rabat, archdiocese which includes most of Morocco. Held in the city's cathedral, at the celebration, religious authorities of various parts of the world took part, including the Rector Major of the Salesians, Fr Ángel Fernández Artime, and a group of Salesians, besides the elderly father of the new archbishop.

Mons. Romero, 65, had as his main consecrator cardinal Juan José Omella, archbishop of Barcelona, who arrived in Rabat specifically for the occasion. The cathedral, crowded as in only a few occasions, was filled with faithful of European and sub-Saharan origins, since it is forbidden for Moroccan Christians to attend Mass.

On behalf of local institutions, the Wali (Governor) of Rabat-Salé, the President of the Ulema Commission and several representatives of the Ministry of Foreign Affairs, along with numerous diplomats, also took part.

During the Ordination Ceremony, in French and Spanish, with some prayers in various European and African languages, Cardinal Omella reminded the new archbishop that his work would consist mainly in assisting sub-Saharan emigrants and students in Morocco who in the last few years have become the main segment of the population in the country's Catholic churches.

But Cardinal Omella also twice specified that this work had to be carried out "without any form of proselytism", with reference to the Moroccan Penal Code expressly prohibiting any activity consisting in "diverting Muslims from their faith", for which in the past,  there have been cases of foreigners being extradited from the country.

Mons. López Romero Romero received his ministry as a bishop from his predecessor, French archbishop Msgr. Vincent Landel, who worked in the Archdiocese of Rabat for 19 years.

With few but significant words, the new archbishop of Rabat said, "I have come to love you. The principle service that I must offer you is not organizing activities, directing parishes or undertaking pastoral initiatives, but rather the service of love."

And he concluded with a sentence: "My roadmap will have Pope Francis as a point of reference."