Burundi - Rector Major: "Go and bear witness of the spirit you have received from Don Bosco" 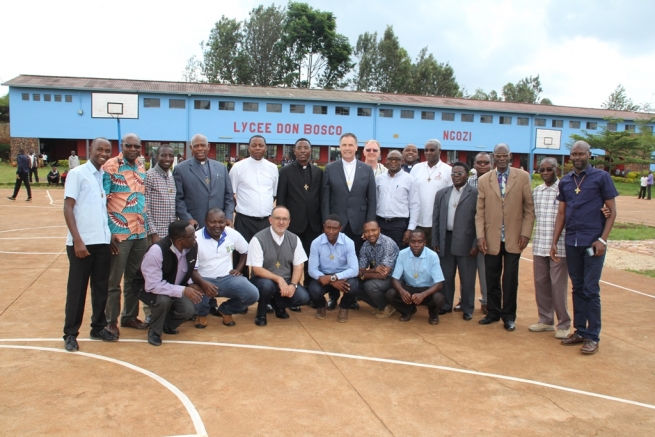 (ANS - Ngozi) - Salesians, young people and Salesian Family: in a single day, yesterday, March 13, in Ngozi, the Rector Major, Fr Ángel Fernández Artime, met all the main protagonists of the Salesian world in Burundi. Listening and paternal accompaniment were the fundamental traits that characterized each moment of interaction.

In the first meeting, in the morning, with his confreres, the Rector Major illustrated the present of the Congregation and the challenges that await it. Then, he encouraged everyone by remembering: "Our Congregation is full of life and becomes progressively more serene."

The Rector Major then met with about 1200 young Burundians who told the Rector Major that Salesian schools were well known and much appreciated throughout the country. The X Successor of Don Bosco asked them if they were happy to be students of Don Bosco, and received a choral "yes" from everyone. Expressly addressed to the older students, he exhorted them to: "go and bear witness of the spirit you have received from Don Bosco, in the world of work or in higher education." He concluded by underlining the centrality of those values such as honesty, kindness and generosity, which are not education subjects per se, but fundamental traits of education.

Later in the afternoon the Rector Major presided over a Eucharist for the members of the Salesian Family during which he recalled that defining oneself as Christians means "always having God in one's heart".

Finally, in a following meeting with the Salesian Family, Fr Á.F. Artime reiterated once again that the Salesian charism is shared with many other groups and people who are committed to doing good for the young. He then answered all the questions of those present - including the requests for a female internship in Ngozi and of a Salesian university in the country, for which he assured them that the Council of the Vice Province of Africa-Great Lakes would verify their feasibility.

The day ended with a cultural evening and a fraternal meeting.

This morning, March 14, Fr Á.F. Artime reached the Salesian house of Rango, in Butare, in Rwanda, which houses a Vocational Training Center, the oratory and the parish. Again, the festive welcoming committee was waiting for him many kilometers in advance of the Salesian house to give homage to the Successor of Don Bosco with songs and flowers.