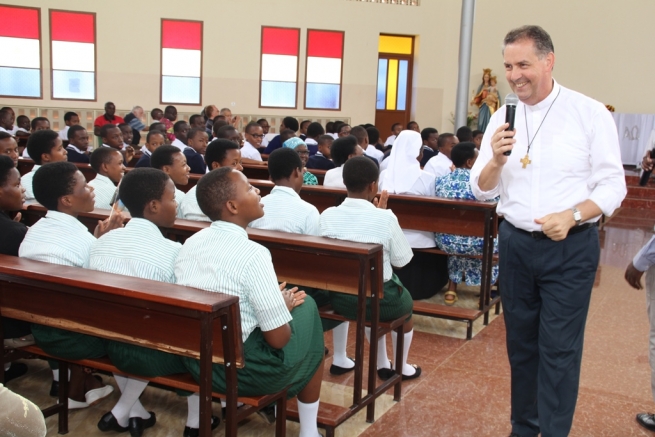 (ANS - Kigali) – Yesterday, March 15, Fr Ángel Fernández Artime, the Rector Major, spend the second and last day of his visit to Rwanda almost entirely in Kigali. After the dialogue and mass for young people who came from all over the country, the 10th Successor of Don Bosco spent his time getting to know and encouraging the local Salesian Family.

In the homily of the Mass for the young - attended by delegations from all the Salesian presences of Rwanda, for a total of about 550 young people - the Rector Major said young people have a bright future ahead, if they continued to put into practice the good values ​​offered by the Salesians. He also thanked the teachers and other adults present at Mass, encouraging them to continue to serve young people on their personal journey of growth. Before dismissing the assembly, he blessed the statue of Mary Help of Christians and that of Don Bosco, offered as a gift by the Shrine of Mary Help of Christians in Turin.

In mid-afternoon the Rector Major, accompanied by his Secretary, Fr Horacio López, and Fr Américo Chaquisse, Councilor for the Salesian region of Africa-Madagascar, and the Provincial of AGL, Fr Camiel Swertvagher, reached the airport from where he flew to Kampala, the capital of Uganda, the third and last country to be visited.

Warmly welcomed also on this occasion, Fr Á.F. Artime then reached the Salesian community of Namugongo, near Kampala, where he spent the night.