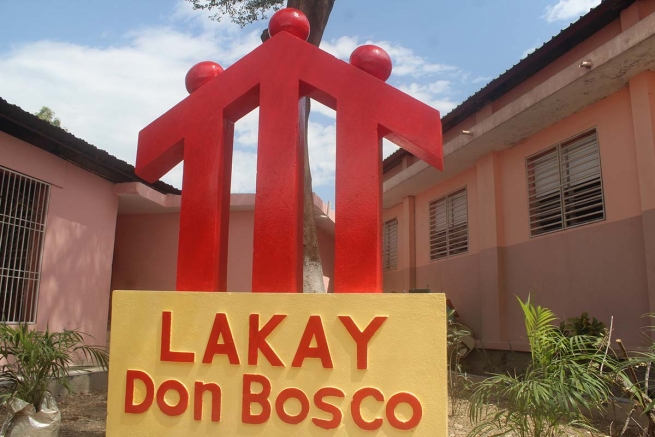 (ANS - Port-au-Prince) - The Salesian service for Haitian children and youth in difficulty - "LAKAY Don Bosco" - was established in 1988 in Port-au-Prince on the initiative of the Italian Salesian Fr Attilio Stra. The project aimed and still aims to answer to the cry that comes from the hearts of many children, adolescents and young people who are rejected and marginalized and live in situations of neglect, negligence or serious social risk.

To thank the Lord for these 30 years of joyful service, last Friday, March 9, at the center of La Saline a Eucharist was celebrated, presided by Fr Jean-Paul Mesidor, the Superior of the "Beato Filippo Rinaldi" Vice Province of Haiti. In his homily, Fr Mesidor traced the journey made by the Salesians through the LAKAY project during these past 30 years and he congratulated the older employees who were present from the beginning of this educational and training proposal.

Currently, the LAKAY project includes 5 facilities in Port-au-Prince and one, divided into two sectors, in Cap-Haïtien. Each of these structures was created in response to the concrete situations in which the children, young people and youths at risk of the two cities find themselves; in total, around 5700 minors and young people benefit from this service thanks to the 57 staff members.

The centers of the LAKAY project are specialized for the various stages of life and to the types of assistance needed by the beneficiaries. At "Foyer LAKAY", the children live as a family for a period of 4 years until the completion of their apprenticeship in a technical profession, of school education and social education.

"Look up! Look far!" is the motto of the LAKAY project. And it is a motto that has come to fruition in splendid fruits; many of the young people formed at the project centers have become engineers, educators, teachers and valid workers at local businesses.

On the occasion of the anniversary, after the Eucharistic celebration, on March 9th there was also a cultural event, the protagonists being the same young people welcomed at the centers of Lakou, Atelye-Lakou, Lakay Port-au-Prince and Cap-Haïtien. Spontaneously, all the beneficiaries expressed their joy for that feast day and also thanked the Salesians of Don Bosco for having taught them to live with dignity and respect.