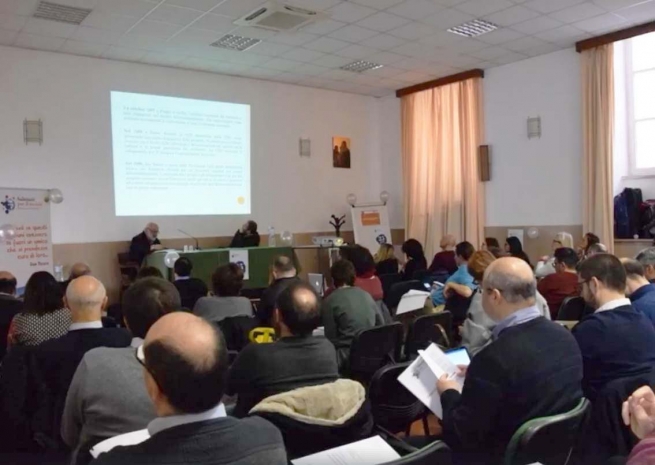 (ANS - Rome) - "Salesians for social work or welfare is a Salesian house without walls. If in 1993 we had not equipped ourselves with this civil instrument, we would not have received all the fruits that have matured across these years." With the words of Fr Stefano Martoglio, Councilor for the Salesian "Mediterranean" region, the 2018 Ordinary Assembly of the "Salesians for Social Work" Federation, the SCS/CNOS, or Civil and Social Services/National Center for Salesian Works, began in Rome last March 16 with over seventy representatives of the institutions that make up the Federation.

The event celebrated 25 years of activities dedicated to Italy's young. "This reality has shown itself to be able to last over the years for its way of operating, but above all, for its method that connects people with the most different states of life (religious and laity) and all this in line with the spirit of the Second Vatican Council," continued Fr Martoglio.

During the morning work sessions, a window was opened on the history of the Federation, established 9 July 1993, which today includes more than 80 non-profit organizations, all inspired and guided by the educational passion of St. John Bosco.

The association has been a pioneer in having immediately believed in the great value of conscientious objection (now Civil Service) and in these months is preparing to face with courage Italy's new regulations regarding associations in its so-called Third Sector Reform.

This reform, in fact, was discussed in the afternoon by the various Delegates who, divided into groups, examined the regulatory changes envisaged by the new Code and by the individual decrees. In the morning, instead, Fr Domenico Ricca, former President of “Salesiani per il Sociale”, together with the Director General of the Federation, Andrea Sebastiani, and then Fr Giovanni D'Andrea, President, had presented its 2017 activities report.

The assembly was also an opportunity to launch the twenty-fifth anniversary celebratory advertising campaign, made by the national headquarters and already broadcast by and across social networks.

Today, through the associated organizations, Salesians for Social animate 33 residential communities (family houses, housing communities, semi-autonomy), 30 day centers and 17 reception centers and support services against addictions, distributed throughout the nation. This work is carried out by over 780 qualified operators, around 100 supporting members and more than 2000 volunteers.