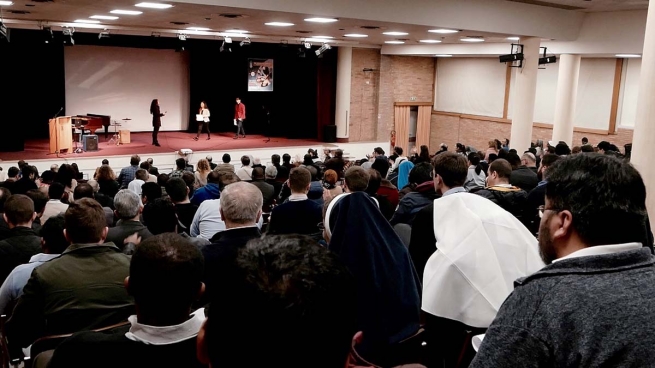 (ANS - Rome) - On March 14, the Day of the Salesian Pontifical University (UPS) took place, a moment of sharing and community. Presided by Msgr. Fabio Fabene, Undersecretary of the Secretariat of the Synod of Bishops, and Fr Mauro Mantovani, Rector Magnificus of the UPS, the day was presented by Sara Gugliersi and Andrea Santoni, students of the Faculty of Social Communication Sciences (FSC). The day began with the greetings of Fr Ivo Coelho, General Councilor for Formation, and the introduction of nine workshops.

The workshop on the theme of “Television Series”, with a focus on the show “Black Mirror”, was offered by the UPS Salesian Cooperators Center, with a talk by TV scriptwriter Alessandra Caneva. A discussion of the educational paths between the Classical and Christian world starting from Plutarch were organized by the students of the Faculty of Christian and Classical Literature, and was introduced by prof. Miran Sajovic.

The Faculty of Theology offered a workshop on the accompaniment of young people in their life choices, and was coordinated by prof. Jesús Manuel García, with the collaboration of several students. The Faculty of Educational Sciences proposed two workshops: the first organized by prof. Anna Rita Colasanti and prof. Mario Becciu, on self-efficacy beliefs, while prof. Mario Llanos discussed the ethical aspects of youthful choices, distinguishing between conformist, “reset” and responsible.

Fake news, truth and society of communication were the topics addressed by professors Tommaso Sardelli and Vittorio Sammarco of the FSC, which also proposed another workshop, again yesterday, on the relationship between advertising, social networks, influencers, held by professors Simonetta Blasi and Roberta Gisotti.

The artistic exhibition organized by UPS students marked the beginning of the second part of the work sessions. The sociologist and prof. Franco Garelli of the University of Turin commented on the data collected on the perception of the Salesian world on youth.