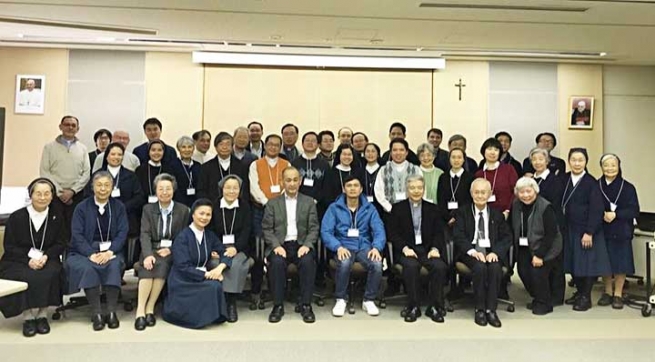 (ANS – Tokyo) – At the present time there are about 200,000 Vietnamese migrants resident in Japan, a good number of them are Catholics. The proposals of the first General Assembly on Vietnamese migrant ministry (Tokyo, March 13) are very concrete and viable. These are the first impression after this important meeting.

After the first stage of an individualistic approach to the Vietnamese migrants' pastoral care, the first ‘General Assembly’ met to share the current experiences of many initiatives at the diocesan and religious congregational level. Some of these ministers are also lay activists for human rights, called in Japan 'help group' or 'cooperatives' who work at the airports, among other places, when some are about to be deported to their country of origin and know the local laws better than the mafias involved in human trafficking. Indeed, famous Japanese agencies called 'Haken Gaisya' are dedicated simply to human trafficking and able to cheat family members with many tales about romantic Japan. In Ho Chi Min City, there is also a center for unwanted children of women who became pregnant in Japan. This is just one of the many stories told during the Assembly.

As Salesians we could do something – link, for example, Salesian parishes in both countries, get in touch with the agencies or enterprises that receive Vietnamese workers. But the migrant numbers are growing. The estimates are about 230,000 Vietnamese, and if one counts the children of Nepalese and Filipinos, the numbers rise to about one million.

Two Salesians – Fr. Mario Yamanouchi and Fr. Takei - together with three other CONFER members (Association of Major Religious Superiors of Japan) took part in the meeting.

The Assembly was organized by the Catholic Commission for Migrants and Refugees of Japan in the headquarters of Japan's Catholic Bishops Conference in Shiomi and was presided by Nagoya's Bishop Michael Matsuura Goro who represented the whole bishops' conference. More than 40 Vietnamese and Japanese participants from religious congregations, lay people involved in this ministry, participated. A few professionals in human rights and advocacy contributed to the quality discussions.

The Salesians of Japan would like to contribute effectively to the needs of Vietnamese migrants in Japan, especially as their numbers are growing and some of them have been living here already for the past 20-30 years and the second generation is already present. Since an effective help to the migrants cannot be done only by few, there is a strong need of networking among all congregations and dioceses involved as well the mutual information and cooperation network between the Catholic Church in Vietnam and Japan.

Operative conclusions of the meeting: