Lebanon – Visit of the Rector Major 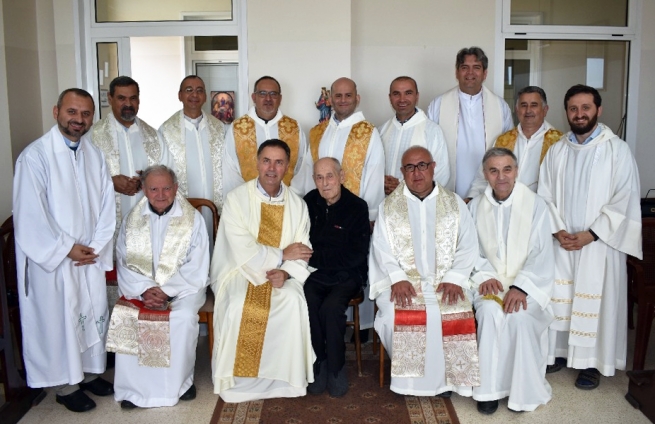 (ANS - Beirut) - At the end of the Intermediate Plenary Council and the celebrations of Easter rites, Fr Ángel Fernández Artime, Rector Major, accompanied by his Secretary, Fr Horacio López, left for an animated visit to the Salesian presences in Lebanon. The Rector Major departed from Rome Fiumicino airport on the evening of Monday 2 April and landed in the night in Beirut, the capital of Lebanon.

At the airport, Fr Á.F. Artime was welcomed by a delegation of Salesians, including both the Provincial of the Middle East (MOR), Fr Munir El Rai', and the appointed provincial, Fr Alejandro José León Mendoza.

After a few hours of rest, yesterday afternoon, Tuesday, April 3, the X Successor of Don Bosco met the Provincial Council. Then, during the Eucharist with his confreres, the 10th Successor of Don Bosco preached a brief homily in which he reiterated the themes of the Easter celebrations to instil a message of hope and optimism: Christ is risen, wars and violence still express the existence of evil, but thanks to faith, Christians are aware that it is precisely passing through the Cross that one reaches resurrection.

After the celebration, the Rector Major visited the shrine of Harissa - located about 20 km north of Beirut and dedicated to the Madonna with the appellation of Our Lady of Lebanon.

The Salesians of Don Bosco have been present in Lebanon since 1952 and currently animate two canonically erected houses: in Fidar and in El Houssoun.