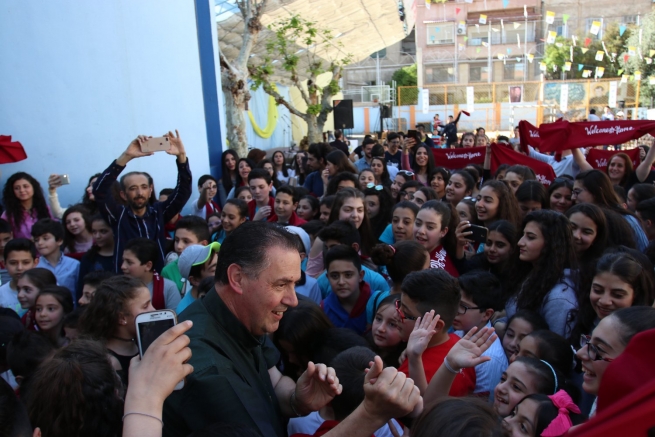 (ANS - Damascus) - While East of the Syrian capital, Damascus, the war continued, the Rector Major, Fr Ángel Fernández Artime, accompanied by his Secretary, Fr Horacio López, was in the Syrian city committed to bringing, as Successor of Don Bosco, comfort, joy and hope to a population wounded by over 7 years of war.

The Rector Major arrived in the city on Thursday 5 April. In the early afternoon, accompanied by several young people, in a spirit of pilgrimage he made the journey of the Apostle Paul and reached the church of St. Anania. There was a recital of the story of the conversion of St. Paul, after which Fr Á.F. Artime pronounced a few words of commentary, emphasizing how important it was for everyone today to change their lives by directing it towards God.

The day concluded with the celebration of the Eucharist at the church of St. Paul in the area of Tabbala, in Damascus, and with words of encouragement to the many who approached him.

The next day, Friday, April 6, the Rector Major first gathered with the Salesians of the local community to listen to their problems and challenges and to offer his accompaniment. Then, in the afternoon, he participated in a festive meeting with all the children, teens and young people of the oratory - for a total of about 1,000 people. "He was asked to pose for pictures and took selfies with all those who asked him!," said an amazed Sally A-Jamra, the Social Communication Delegate of the Middle East Province (MOR).

The afternoon continued with traditional performances by the oratorians, to which Fr Á.F. Artime himself responded by playing the guitar much to the joy and satisfaction of everyone present. The Rector Major himself then presided over Mass in the courtyard of the house, then freed a dove in flight, a sign of peace for the city and the country.

Finally, quoting Don Bosco, he told the young people present that they had stolen his heart, and that during the evening spent with the center's Pastoral Educational Community, he said, answering all the questions addressed to him, he was happy to have found the second Valdocco in Damascus.