Mozambique - "What do all these names have in common?" Fr Martín Lasarte in missionary formation 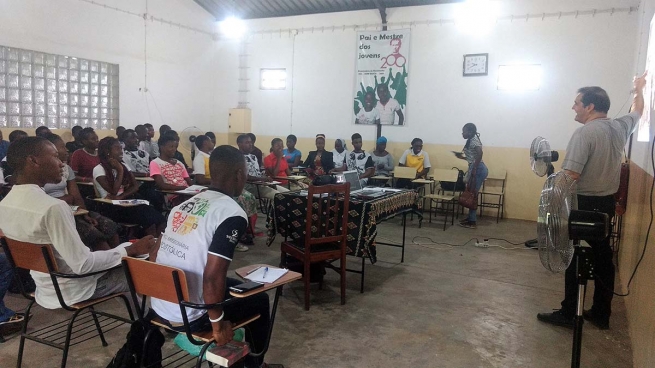 (ANS - Matola) - Francisco is 14 years old and has been asking for alms since he was seven years old, that is since his mother died. Dércio is also 14, is his best friend and is part of the same group of minors that stand at the EN4 traffic light – the "Estrada Nacional 4" which connects Mozambique and South Africa – where they ask for money. There is a sort of brotherhood at the Matola toll booth, where about a dozen children and teenagers approach drivers each and every day.

Filomena and Inicencio are siblings. Their mother insists they are five years old, but they seem to be at least 10. The mother watches them from afar to see how much the children manage to collect daily. Edu is 17 years old and has been deaf-mute since birth. Luiza is 13, Monica is 21 and has a nine-month-old, but she still runs with the group.

What do they all have in common? The absolute and urgent need to be seen and welcomed. Nobody knows how to read or write. Not only do they not have money, but they also lack schooling, social attention, dignity and the fundamental right to be children and adolescents.

Speaking to these minors were the members of the missionary teams who participated in the training session held on 7-8 April at the "Emmaus" Spirituality Center, in Matola, led by Fr Martin Lasarte, of the Missions Department.

On the first day of the meeting Fr Lasarte spoke about "Missionary Dimension in Youth Ministry" to about 50 young people from Goba and Namaacha (on the border with Swaziland), from Moamba (on the border with South Africa) and from various parishes of Maputo and Matola. The day ended with a vigil led by Fr Francisco Pescador, Delegate for Youth Ministry in the Mozambique Province, by Fr Luiz Gonzaga Piccoli, Delegate for Missionary Animation, and Fr Lasarte.

The second day began with the celebration of the Eucharist, during which a group of young people were sent as envoys: they set off on a mission of evangelization in various places around the "St Domingo Savio" house in Matola. They visited the families, listened to their stories, difficulties, desires ... At the end of the morning they came back to share the many experiences they had had.

As for the street children at the EN4 toll gate, the group has made a commitment to return to the minors for what will be a journey of accompaniment.