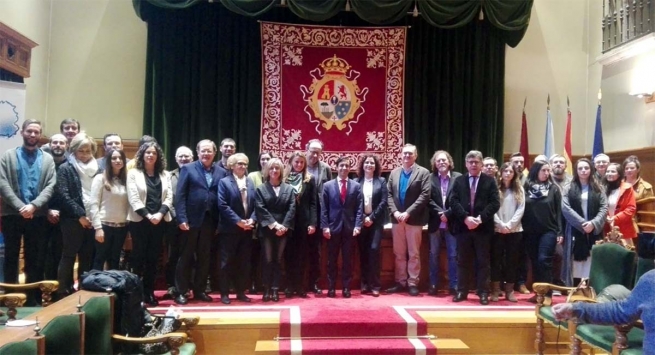 (ANS - Santiago de Compostela) - Twenty-one social entities of Galicia have decided to join forces to build the first Platform for Infancy of that Autonomous Community, and the Don Bosco Federation of Galicia has taken the lead, with Xesús María Vilas Otero its representative and president. Working as a network to analyze the situation of the children and adolescents of the Autonomous Community, improve child policies and ensure the effective implementation of children's rights are the objectives of this platform, which is supported and inspired by the Platform for Children of Spain.

In addition to the aforementioned, others who participated in this act were: José Manuel Rey Varela, Councilor for Social Policies of the Galician Junta, various political and civil authorities, María del Carmen Fernández Morante, Dean of the Faculty of Educational Sciences of the University of Santiago de Compostela, and Fr Santiago Domínguez Fernández, Salesian in charge of Salesian Youth Centers in Spain and Secretary General of the Platform of Childhood Organizations of Spain.

The general objective of this Platform is the protection and the promotion of the Rights of the Child, as established by the 1989 Convention on the Rights of the Child, the UN convention with the highest number of national ratifications in history, which is also supported by the Spanish Parliament. The National Platform was created in 1997 and currently includes 59 organizations, including the Salesians of Spain, represented by Fr Domínguez, who is also its Secretary General.

From this common area, the organizations shall be working to promote general and sectoral policies aimed at increasing children's well-being, denouncing and monitoring situations of violation of children's rights, as well as raising society's awareness regarding the knowledge and respect of and for children's rights.