Vatican - The Church for Amazonia, Amazonia for the Church 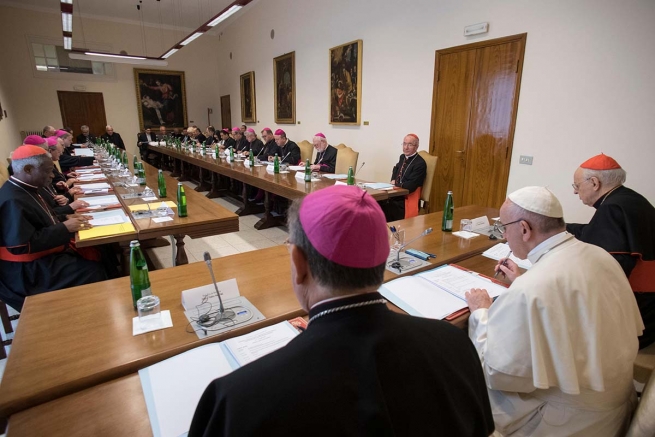 (ANS - Vatican City) - On 12-13 April, 2018, the first Pre-Synodal Council Meeting of the Special Assembly of the Synod of Bishops for the Pan-Amazon Region was held, presided by Pope Francis. The Salesian of Tuyuca origin Fr Justino Sarmento Rezende, the first indigenous Salesian ordained priest, 24 years ago, also took part.

Attended by the 18 members of the Council (which includes the Salesians mgr. Edmundo Ponciano Valenzuela Mellid, archbishop of Asunción, in Paraguay, and Msgr. José Ángel Divassón Cilveti, former Apostolic Vicar of Puerto Ayacucho, in Venezuela) and 13 experts, the draft of the Preparatory Document for the Synod was examined, with the Synod scheduled for October 2019 on the theme: "Amazonia: new paths for the Church and for an integral ecology."

After related proposals for improvement, the document was approved by the Council and shall now be transmitted, together with a questionnaire, to all Episcopal Conferences and other bodies involved to start pre-Synodal consultations.

"The Church is watching us. It is with us with its heart and mind, placing in the people of Amazonia the hope of receiving important contributions, so that the Church may be at in time grow increasingly rooted at the local and more universal level," said a satisfied Fr. Rezende.

Fr Rezende was also the author of one of the reports presented to the Council, which he did on Thursday 12. In addition to expressing his joy at being able to meet Pope Francis for the first time, he expressed his wish, on behalf of the indigenous peoples, to "give thanks for the many missionaries, priests, bishops who gave their lives for us, the peoples of Amazonia and the indigenous peoples. Some were martyred to defend us and many of them acquired an indigenous face, learning its culture, language, traditions, and today they are buried in mission lands. (...) Thanks to this missionary work, many lay people in the Church, catechists, extraordinary ministers, religious and priests have emerged. And this is the face we must offer as a Church."

According to the Salesian, the Synod shall be "a very important moment to show the ways of the Church in our region and to propose new paths, keeping in mind our Christian life and our commitment to the defense of nature, our way of living the economy, sustainability, pastoral life ... "

"We, indigenous peoples, evangelized and evangelizers, can contribute to the enrichment of our Church," concluded Father Rezende.