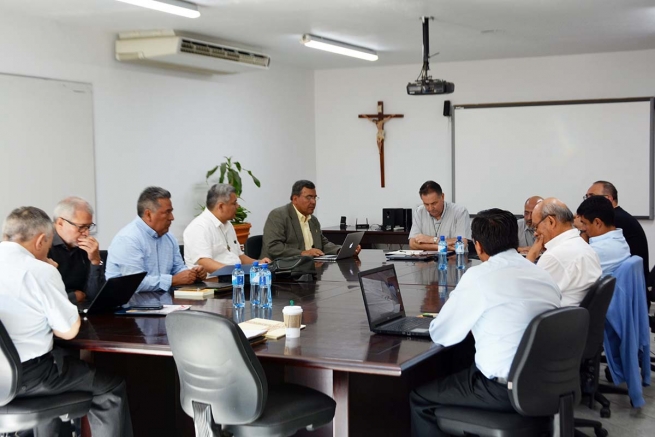 (ANS - Guadalajara) - The Rector Major's first day in the Mexico-Guadalajara Province was spent in animation and government, with his meeting the Provincial, Fr Hugo Orozco, and the Salesians of the Provincial Council. The activity took place in the Provincial House, in the Chapalita area, on the morning of Tuesday 17 April.

During this meeting, the Fr Á.F. Artime was able to measure and evaluate the current state of the Guadalajara Province, an analysis from which light and shadow emerged, with a review of the results achieved and tasks yet to be realized, and presented his vision of the whole Salesian Congregation. The meeting took place in a climate of dialogue during which each member of the Provincial Council was able to express his own feelings and thoughts on the path of the spiritual Sons of Don Bosco in the central and northern part of Mexico.

Later, Fr Á.F. Artime presided over the Eucharistic concelebration in which, alongside the Provincial and his Council, several Salesians from various parts of the entire metropolitan area also took part. In his homily, the Rector Major recalled those in Syria who identified themselves with Don Bosco and continued to carry out their mission, be they Salesians, young or lay collaborators. He also mentioned his recent visit to Syria, which ended just a few days ago, done to express his solidarity towards that population tested by the war and to be near them.

In the evening, at 7:30 pm, the Rector Major presided over the prayer of Vespers in the auditorium of the Salesian Superior Institute of Tlaquepaque, also in Guadalajara; prayer gave way to a simple evening wherein representatives of the various groups of the Salesian Family present in the city were able to embrace, in a figurative and real sense, the Successor of Don Bosco; for his part, he offered a simple "good night" message, and once again recalled all the young people and Salesians in Syria suffering because of the war.

In the Rector Major's honor, the young people of Tlaquepaque offered a short musical about Don Bosco and the Oratory of Valdocco, while the Rector Major emphasized that young people, both from Syria and from Mexico, indeed testified with all their enthusiasm that "Don Bosco is always (and very much) alive."