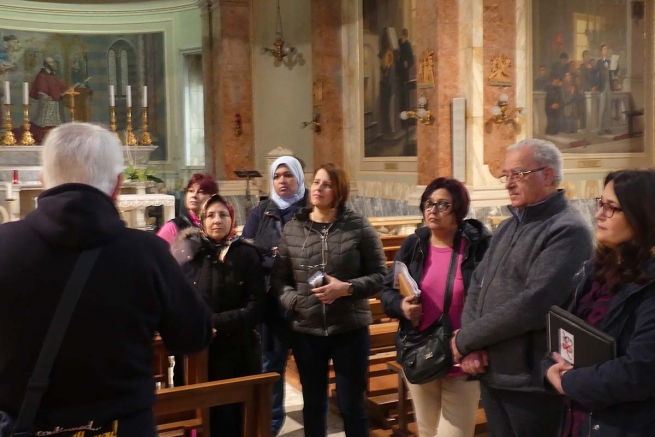 (ANS - Kenitra) - The Salesian center of Kenitra, active in Morocco since 1937, organized a visit to the Salesian Sites from 9 to 17 April. Attended by seven teachers, all Muslims, they were accompanied by the Director of the institute, Fr José Antonio Vega.

In the Salesian school of Kenitra, the professors are exclusively Muslim and the course on Islam is mandatory. The Salesian charism is, however, well-known thanks to the constant presence of Salesians among the young and many educators consider themselves "Salesian Muslims."

On this occasion, Fr Vega organized a formation program that included a visit to all the Salesian sites: Valdocco, the city of Turin, the Becchi, Colle Don Bosco, Chieri ... The Salesian communities of Colle, Chieri and Valdocco, aware of this experience, invited the group to share meals with them, to learn more about the meaning of this initiative.

The Salesian center of Kenitra now has 1,400 students and 80 Muslim teachers. The different sectors of the Salesian center (kindergarten, elementary, middle and high school) live the ongoing dialogue with the Muslim world in their own daily lives, apply Salesian pedagogy, respect their surrounding world and bear witness with the utmost respect.

Don Bosco is known and loved by everyone. For this reason, it seemed that the time had come to respond to suggestions from the professors themselves who had expressed a wish for formation as Salesian "cooperators", and wanted to learn about the sites where Don Bosco was born and had lived. At the beginning of the school year this idea was proposed to a small group and some accepted, paying the costs of their trip themselves.

The aim of the initiative is so professors, teachers, parents, young people and past pupils may live this profound experience of Salesian spirit and content.

All the participants returned to Morocco, happy and admired: "I have known Don Bosco for years, but now I am able to understand much more and above all the reason for his work for the young," said one of the teachers at the end of the experience.

The Salesian center in Kenitra is completed by a small parish for foreigners, mainly young African university students, which brings together circa one hundred faithful from about 30 different countries at its Sunday Eucharist.

"In everything we do, we want to be a little bridge (which is the meaning of the name Kenitra) between Christians and Muslims. This small church 'of testimony' in a city that is 100% Muslim is significant for the life of the Church," the Salesians in Morocco concluded.