Mexico - Rector Major: "Dare to take courageous steps to share the spirit and mission of Don Bosco with laity" 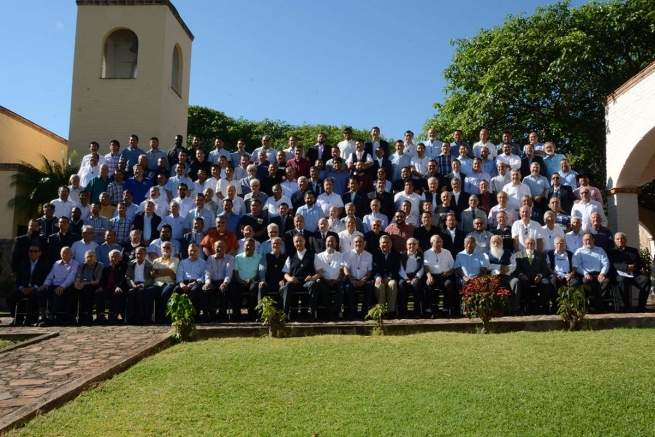 (ANS - Amatitán) - On Wednesday 18 April, the Salesians of the Mexico-Guadalajara Province (MEG) met with Fr Ángel Fernández Artime, X Successor of Don Bosco, at the House for Spiritual Exercises "Betsaida" in Amatitán, about 40 km from Guadalajara, on a day marked by fraternity and proximity.

It was the first time that all the Salesians of MEG met in Amatitán; every year they do gather here for the Spiritual Exercises or for the weeks of ongoing formation, but only in groups of 40-50 confreres. The possibility of meeting the Rector Major was also meaningful, since on this special occasion he fostered a true meeting between almost all the Salesians in the Province.

By helping the Salesians present to understand the current state of the Congregation, the Rector Major shared his thoughts on the different challenges the Salesian Society is facing, challenges also found at the "Christ the King and Mary Help of Christians" Province of MEG.

Fr Á.F. Artime urged his confreres to "dare to take courageous steps to share with the laity - with greater determination - the spirit and mission of Don Bosco."

The Rector Major spoke with the Salesians of MEG for four hours, always in an atmosphere of great clarity, without neglecting a loving and enlightening word for every circumstance.

At various points during his talk, Fr Á.F. Artime offered very specific and concrete indications and, in some cases, asked the General Councilor for Social Communication, Fr Filiberto González - originally from the Province - to take notes on his behalf in view of the forthcoming Extraordinary Visitation to which these will conduct between August and November.

To better understand the physiognomy of the MEG Province: it was erected in 1963 by separation from what was previously one sole Province of Mexico. It currently has 166 Salesians distributed in 24 canonical communities, the last erected in 2017. Given the territorial configuration of the Province and the needs of many young people who dream of crossing the border with the United States, seven centers are especially significant for their being on the border between the two countries; from West to East: Tijuana, Mexicali, Nogales, Ciudad Juárez, Ciudad Acuña, Piedras Negras and Nuevo Laredo.