Mexico - Rector Major: "We are sharing a precious mission for young people" 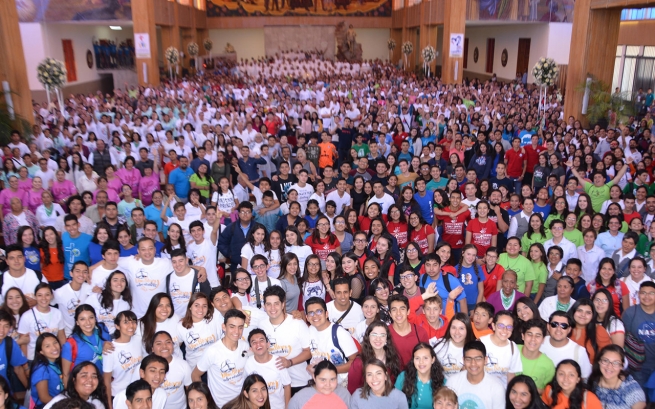 (ANS - León) - The Rector Major began Thursday, 19 April, at the Don Bosco Institute of León, in the State of Guanajuato, where about a thousand students and other students of the "Niños Don Bosco" project received the message of the Salesian "good morning" by Fr Ángel Fernández Artime himself: "Continue to live this house with enthusiasm." Then, turning to the students of the institute, he added: "I am convinced that when you'll be in university ... or when, in a little while, you'll start working, you will continue to feel the years that you lived here, inside your heart."

To the educators, the 10th Successor of Don Bosco offered a message of gratitude for "this work of art you are doing with these young people." Together, Salesians and lay people, he continued, "we share a precious mission."

Subsequently, in the National Shrine of St. John Bosco, Fr Á.F. Artime met the representatives of the Salesian Family. Acknowledging the common charism and the specificity of each group, he invited those present to have "open doors", alluding to the need to not act as closed groups, but on the contrary, to operate with openness and a "heart ready to meet the other." In this sense, he also insisted on "communion among ourselves", a testimony that each member of the Salesian Family is summoned to give. And finally, he urged everyone "to continue to grow", in reference to each group of the Salesian Family being called upon to continue to grow and expand.

At the center of the day, there was the Eucharist, concelebrated by about 60 Salesian priests, before numerous young people of the Salesian Youth Movement (SYM).

Then, at the "Ciudad del Niño Don Bosco", the Rector Major listened carefully to the reflections and testimonies of some young people of SYM and then presented them with some challenges and dreams. To those who spoke about the importance of the oratory in their lives, Fr Á.F. Artime invited them to collaborate so that other children can live what they had lived in the oratory. To one who told of his experiences as a volunteer in Bolivia, and also expressing the desire to repeat the experience in a more demanding context such as Syria, the Rector Major answered with an exhortation to continue to prepare - for example, by learning the Arabic language – a means to better offer one's own contribution in that land and context.